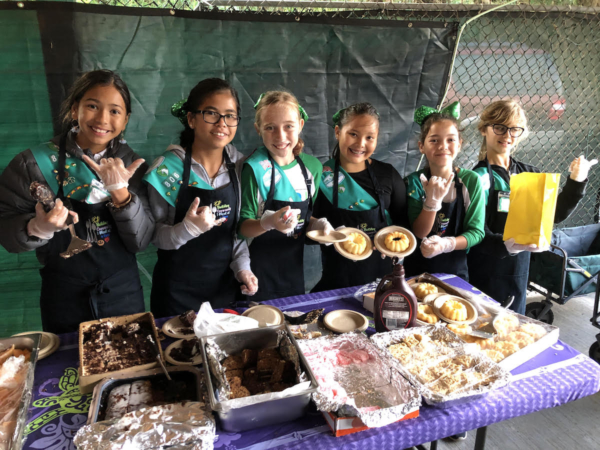 Members of a local Girl Scouts troop flash the shaka sign of aloha during a break from serving dinner at a recent Waimea Community Meal at St. James Episcopal Church in Waimea, Hawaii. Photo: Jeanne Savage

[Episcopal News Service] It can be lonely in paradise.

The Big Island of Hawaii is a stunning combination of deep tropical canyons, wind-scrubbed hills, occasionally snow-capped mountains, high surf and active volcanoes, but it can be hard to live there.

Some of the 186,000 people who call the 4,000-square-mile island home live in multimillion-dollar houses. Others pitch tents on beaches. In a tourism-based economy, many residents work more than one job to make ends meet. Groceries cost 60 percent more than the national average.

Every Thursday evening a group of staunch volunteers and one part-time paid coordinator use donations of food and money from Waimea-area businesses, farms and other organizations to feed the bellies and souls of more than 350 people in 90 minutes at St. James Episcopal Church. Diners eat together at long tables in the open-air Savanack Pavilion on the church grounds while volunteers deliver meals to home-bound people.

The team’s work and the parish’s commitment to the ministry is getting a major boost. One of St. James’ mainland visitors who considers the parish to be their second church home has pledged $1 million toward the planning and construction of a gathering space to house the weekly meal and other ministries. The donation will allow St. James to go into the next phase of planning and preparing drawings for bids and permits.

“We are very grateful to the Lematta Foundation of Vancouver, Washington, for their trust in the Waimea Community Meal and their support of our dream,” Junior Warden Tim Bostock told Episcopal News Service.

When the Waimea Community Meal began in December 2016, organizers wanted to help those who were physically hungry, the Rev. David Stout, rector of St. James, said in a recent interview. 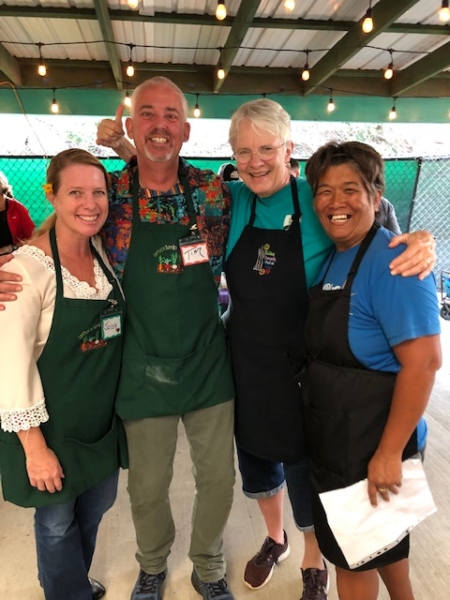 Meal organizers realized that people in and around town “were not only hungry in belly but hungry in heart and soul,” Stout said. “There is a lot of lonely eating on the island.”

He invoked Mother Teresa, who once said that loneliness is the West’s greatest disease.

“We decided very early on that we were not going to advertise this as a homeless meal and that we weren’t going to emphasize the St. James Church thing,” Jane Sherwood, who co-chairs the ministry with Bostock, said in an interview. “So, we are the Community Meal at St. James. While we are church-sponsored, we are not Bible-thumping. We’re trying to live by example; our actions are louder than our words.”

Each Thursday evening, one of the three clergy associated with St. James — either Stout, the Rev. Marnie Keator or the Rev. Linda Lundgren — gathers in a circle the people who are present at 4:30 p.m. for a prayer. They are always there and “collared up,” as Sherwood put it, so that people know who they are when they make the rounds.

The weekly gathering does not offer a bare-bones soup kitchen sort of meal. Think of it as more like a luau with an ever-changing variety of food, entertainment, social services and pastoral care. One night it’s enchiladas with all the trimmings plus hula music. Another week it might be the Hawaiian dish called shoyu chicken served with broccoli soup, roasted carrot and celery salad, and folk music.

Some nights, diners can get their blood pressure checked or take a hot shower.

At every meal people from different backgrounds settle in for the Hawaiian tradition known as talking story, taking as much time as needed to discuss both the mundane and the profound. One recent night a Tesla-driving man talked story with another man who rode in on a rickety bicycle. Meanwhile, kids played outside and families visited the church’s thrift shop.

“It brings us together even if it’s for one night,” DeleCruz told ENS. The meal’s slogan is “building community one meal at a time.” Every week, she said, the regulars show up and often there are new people.

“There had been an idea of a meal bubbling for years,” Stout said. It came to fruition after a congregational process to discern the parish’s call to ministry. He credits Bostock and Sherwood with being “the visionaries” of what became the Community Meal.

While church growth is not the meal’s goal, six adults and nine children or youths who have baptized into St. James had an initial connection through the Community Meal ministry, according to Stout and Susan Acacio, who heads the parish’s ministries for children, youth and families. About 15 already baptized people have joined St. James through the same connection. 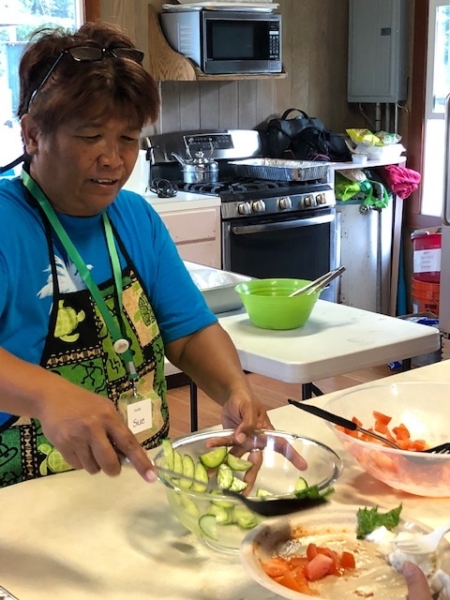 The meal’s weekly orchestration combines food-service logistics with a bit of magic. The Community Meal Core Ministry Team plans the year’s meals and then meets every Monday to fine-tune that week. They make changes based on what food donors have promised to deliver that week and which volunteer cooks are on board. Any needed basics are bought from a local food distributor.

Each week’s dinner involves 80-85 pounds of protein and foods that meet a growing demand for vegetarian and vegan offerings. The meal usually features three different salads and lots of vegetables.

“We’ve gotten pretty creative with kale,” said Bostock. The team has stealthily but good-naturedly introduced people to new foods. “More salads are being eaten by people who would not normally eat salads,” said DeleCruz.

On Tuesday, a large sign inviting everyone to the meal gets hung up near the entrance to St. James on busy Kawaihae Road. Wednesday is food delivery day. Those deliveries include a weekly donation of expired but still-usable food from the island’s only Costco.

As DeleCruz spoke to ENS recently, a new donor dropped off some microgreens. DeleCruz said she is “on 24 hours a day” connecting with people in her broad network of contacts, which she built while previously working for social service agencies across the island. 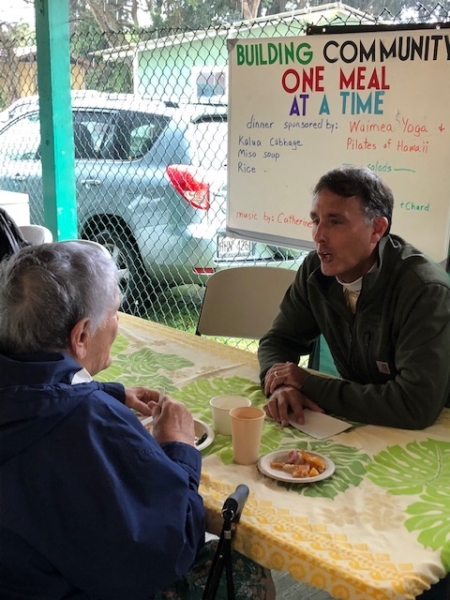 The Rev. David Stout, rector of St. James Parish, who sees the meal as an extension of the Communion table, says the lay leadership of the Community Meal Core Ministry Team frees him to be a pastoral presence at the weekly meal. Photo: Jeanne Savage

The parish recently increased DeleCruz’s paid hours because the weekly meal was receiving more food than it could use. She was spending extra time farming out that food to smaller meal programs and food banks so that none would go to waste. Now, that part of her ministry is officially part of her job.

Every week an outside organization pays $600 to help cover the meal costs. The groups often supplement their monetary donations with volunteers from their staff to help serve the meal.

Early Thursday morning DeleCruz is in the commercial kitchen at the back of the St. James sanctuary, setting up equipment and writing instructions for the day on a whiteboard. Soon the vegetable washing crew shows up, followed by the veggie and meat chopping crews. The afternoon is spent cooking, cleaning up, packing up meals for delivery and getting the pavilion ready for the 4:30-6 p.m. meal.

The effort takes about 50 volunteers. “We always seem to get the right number” of volunteers, Bostock said, calling it a weekly miracle.

The youngest volunteer is a 7-year-old boy who often delivers meals with his grandmother and older brother, Bostock said.  The oldest is Harry, a 93-year-old dish dryer. Community-building happens among the volunteers, not just the diners.

“The wonderful thing about these chop crews, as we call them, is that the conversations and the friendships that have developed around our tables is remarkable,” Sherwood said. “They are people who are not church members for the most part but who want to be part of this group, who just come and have fun and chat, and know that they’re part of the big community here in Waimea.”