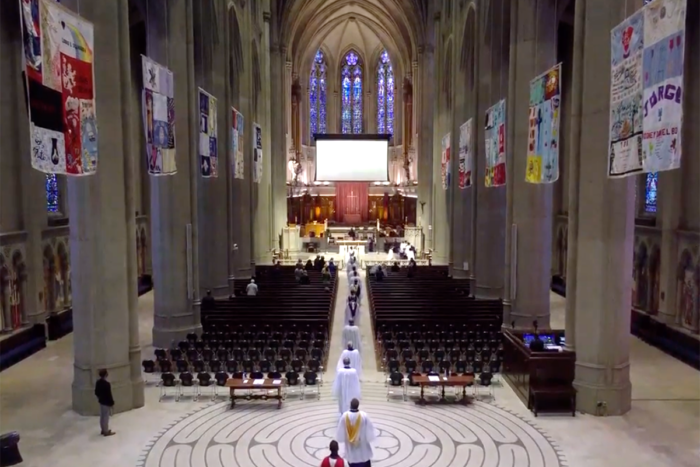 The opening procession is seen in a video of the Sept. 9 Evensong at Grace Cathedral in San Francisco. The cathedral begin requiring proof of vaccination to attend worship services on Aug. 29.

[Episcopal News Service] Sunday worshippers who attend one of the three services at St. Luke in the Fields Episcopal Church in New York’s West Village will face new pandemic protocols starting Sept. 19. In addition to wearing a face mask, they now will have to provide proof that they have been vaccinated against the coronavirus.

Though far from common, across The Episcopal Church some congregations are requiring proof of vaccination, now that vaccines are widely available, easily obtained and demonstrated to be highly effective and safe. Churches that are limiting in-person worship to the vaccinated cite another factor: the recent surge in COVID-19 cases nationwide due to the highly contagious delta variant.

“This is an evolving situation, so we’re trying to evolve with it,” the Rev. Caroline Stacey, rector of St. Luke in the Fields, told Episcopal News Service. She sees in-person worship as a core mission of the church, and church leaders should make attending those services as safe as possible.

“The rights of individuals to choose not to get vaccinated ends where the responsibility to safeguard the worshiping community begins,” she said.

New York’s Cathedral Church of St. John the Divine established a similar vaccination requirement for anyone entering the building starting on Sept. 1. Grace Cathedral in San Francisco, California, began Aug. 29 checking for proof of vaccination at Sunday worship services. The cathedrals allow unvaccinated children to attend worship services with parents who show their own proof of vaccination. In mid-August both New York and San Francisco, the two most densely populated cities in the United States, mandated proof of vaccination to enter certain indoor spaces, such as restaurants and concert halls, though such measures are optional for religious facilities.

Individual Episcopal congregations, with diocesan input, generally are setting their own safety protocols for reducing the transmission of COVID-19 at in-person worship services. Last month, several dioceses, including Maine and Long Island, began requiring clergy and staff members to get one of the authorized COVID-19 vaccinations. That workplace measure also is being adopted by many secular employers, and the Biden administration soon will require most American workers get vaccinated or produce weekly negative test results before clocking in.

Community access is another consideration that church leaders face when setting vaccination status as a condition for entering houses of worship. Some have questioned whether such policies strike the right balance for churches that are striving to welcome all and exclude none.

The Very Rev. Malcolm Young, dean of Grace Cathedral, said he is a longtime supporter of efforts to expand public access to Episcopal churches, so adding a vaccination requirement “wasn’t an easy decision to make at all.” He defended it by suggesting that some worshippers felt excluded before vaccines were required – they didn’t feel safe attending a service open to people who are eligible but have chosen not to get vaccinated.

“I think we may actually have more people coming to church as a result of the vaccine requirement,” Young told ENS. The requirement shouldn’t catch anyone by surprise, he added. “If you’re coming to San Francisco on vacation, you should probably know that having a vaccination card is essential to do pretty much anything.”

Other Episcopal leaders have voiced caution about putting up medical barriers to entering churches, especially months ago amid early concerns about disparities in vaccine access for low-income Americans and people of color.

“We know that early access to the vaccines was often a matter of privilege,” New York Bishop Andrew Dietsche said in a May 27 message to his diocese. At that time, his COVID-19 guidelines stopped short of making “blanket requirements for all of our churches,” but he added, “the church should not be in the business of creating yet another caste system separating those who are vaccinated from those who are not.”

Since then, racial disparities in vaccination rates have diminished, according to data tracked by the Kaiser Family Foundation. Hispanic recipients of the vaccines make up about 17% of the U.S. total, equal to their representation in the population, while 10% of vaccinated individuals are Black, slightly lower than the 12% of the country that is African American.

In mid-April, Massachusetts Bishop Alan Gates and Bishop Suffragan Gayle Harris issued guidance to the Boston-based diocese that both urged all church members to get vaccinated and opposed vaccination requirements for participation in worship services. At that time, only Americans ages 16 and older were eligible for one of the vaccines. Eligibility has since been extended to everyone 12 and older, but Food and Drug Administration authorization has not yet been granted for vaccination of younger children.

In mid-August, the diocese repeated its guidance.

“We strongly urge vaccination against the coronavirus for all our members as soon as they are eligible,” Harris said in an Aug. 16 update. “We reiterate, however, that our congregations must not require vaccination, nor documentation thereof, for attendance at worship services.”

The diocese has chosen to implement other safety precautions instead, the Rev. William C. Parnell, Massachusetts’ canon to the ordinary, said in an interview with ENS. Clergy and staff members must be vaccinated, and congregations must ask worshippers to wear face masks and maintain physical distancing. The bishops also have advised congregations to refrain from serving wine from a common cup and issued other recommendations to slow the spread of the virus.

“They have tried to continue to make the church a place of welcome for everybody, but also to implement the safety protections to ensure that people are gathering safely,” Parnell said.

Congregations are making these decisions within the context of stark regional, state and county differences in COVID-19 case counts and vaccination rates. The United States now is averaging about 150,000 new cases a day after dropping nearly as low as 10,000 a day in June. Some of the worst outbreaks in recent months have been in Southern states where large portions of their populations haven’t been vaccinated.

The Northeast, on the other hand, has some of the country’s highest vaccination rates. In Massachusetts, 67% of residents are fully vaccinated, compared with the national average of 54%. The state also has the second lowest rate of hospitalizations, behind Vermont, according to data tracked by the New York Times.

Maine’s vaccination rate also stands at 67%. Last month, the Diocese of Maine was the first to require clergy and staff members to be vaccinated. The diocese’s churches are considering whether to require the same for worshippers. For example, to enter Saint Peter’s Episcopal Church in Rockland, worshippers now must bring their vaccination cards or show photocopies or cellphone photos of the cards, or else email copies to the church in advance.

COVID-19 vaccination mandates are gaining steam across The Episcopal Church, with two dioceses now requiring vaccination for all clergy and staff, and others issuing similar requirements https://t.co/KjF5coWZ4R pic.twitter.com/i8XlQwIEa1

California’s 57% vaccination rate is slightly above the national average, but the rates in the counties that make up the San Francisco-based Diocese of California are the highest in the state. In San Francisco County, 72% of residents are fully vaccinated, including 79% of all adults. Even so, Grace Cathedral’s vaccination requirement has been a target for critics.

“We’ve definitely heard from people who are not happy with this policy,” said Young, though many of the most vocal critics of the vaccine mandate, especially on Twitter, are not from the congregation. Members of the congregation aren’t uniformly in agreement, he said, but most have been supportive.

California Bishop Marc Andrus has recommended all 75 congregations in the diocese implement a vaccination requirement at worship services, and the diocese estimates about a third have done so.

“All have acted to keep themselves and their neighbors safe,” Andrus told ENS in an emailed statement. “Grace Cathedral has been in the lead in terms of safe practices and has been an inspiration to all our congregations. Their decision to require proof of vaccination is the right thing to do, and in accordance with our strong recommendations.”

Potential ethical questions raised by such policies can be answered by focusing on congregations’ efforts to maximize the sense of community that in-person gathering fosters while also maximizing the safety of those who are gathering, said Scott Bader-Saye, academic dean at Seminary of the Southwest in Austin, Texas.

“You can feel the tension in this,” Bader-Saye said in an interview with ENS. Churches are taking different approaches to striking that balance, and for some to include proof of vaccination among their pandemic precautions “seems to me a position that has ethical credibility.” Others may see that as too high a barrier. “I think all of those can be faithful responses to what’s going on at this point,” he said.

Bader-Saye, who teaches Christian ethics and moral theology at the Episcopal seminary, suggested that the new vaccine requirements would be more problematic if access to the vaccines was as uneven as it was earlier this year. As for the seminary, vaccinations are required of all students, faculty and staff members to appear on campus.

“That’s allowed us to get to about 98% vaccination rate in our community,” he said. “Because of that, we feel a pretty high comfort level.”

St. Luke in the Fields, the New York church, also offers unvaccinated adults the option of showing a recent negative COVID-19 to enter the church. Most of the 200 or so people who regularly attend worship at St. Luke in the Field on Sundays are vaccinated, said Stacey, the rector. With the testing option, “there is no absolute barrier to attending worship, even for unvaccinated persons.”

New York was one of the first cities in the United States to require proof of vaccination for common indoor activities. Starting Aug. 17, that requirement applied to indoor dining, indoor fitness and indoor entertainment. Enforcement is scheduled to begin Sept. 13. With religious services not included, most places of worship in the city have chosen not to ask for proof of vaccination, according to a New York Times report.

On New York’s Upper West Side, Saint Ignatius of Antioch Episcopal Church will not check vaccination status at the door for the 50 or so worshippers who attend services on a typical Sunday. “As a church we cannot require proof of vaccination to participate in public worship,” the Rev. Andrew Blume said in an online summary of the congregation’s pandemic precautions, though that may have been more a practical decision.

In an interview with ENS, Blume said that decision mostly came down to staffing. Larger congregations have more resources to enforce a vaccination requirement, and he didn’t feel comfortable putting Saint Ignatius’ volunteer ushers in that position.

He and his congregation still support vaccination efforts, he said, and the church has implemented other standard precautions, including a mask requirement. “We’re doing a lot of things that are designed to maintain people’s safety and security and their sense of feeling secure and protected and safe in church.”