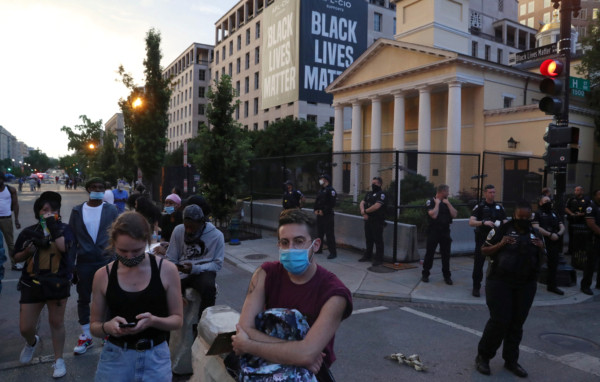 [Episcopal News Service] Security fences have surrounded St. John’s Episcopal Church, Lafayette Square, across from the White House since June, a precaution implemented by the city of Washington in response to the nearby protests against racial injustice after the May 25 killing of George Floyd. Church leaders also had plywood installed over the stained-glass windows for protection.

Now the city is expected to remove the fences by the end of this month, the Rev. Robert Fisher, the church’s rector, said in an Aug. 13 video update on Facebook, and the plywood is getting an artistic makeover.

Many in the congregation will be happy to see the fences go, Fisher said. “That’s something that we’ve been looking forward to.” The plywood will remain, but a local arts organization has agreed to paint over the outside of the boards with artwork illustrating themes of healing, love, compassion and peace.

Stained glass typically is appreciated by those inside a church, Fisher said, but through this initiative, St. John’s will be “putting art facing outward into our city.” Fisher added that the Smithsonian Institution has asked to add the plywood art to its museum collection when it eventually comes down.

Nationwide protests followed Floyd’s death, and the church became a major flashpoint during weeks of unrest related to systemic racism and police brutality.

On June 1, federal officers violently forced peaceful protesters and clergy out of the area in front of St. John’s so that President Donald Trump could pose for photos holding a Bible in front of the church, an action harshly condemned by Episcopal leaders.

Leaders at St. John’s told parishioners in a June 25 email that they had accepted the city’s offer to put up fencing around the property, which had been tagged with graffiti and damaged by fire during protests. The church’s leaders also expressed concern over the unsafe activities of people camping near the church.

The post Security fences to be removed, art added to plywood over windows at St. John’s in Washington appeared first on Episcopal News Service.