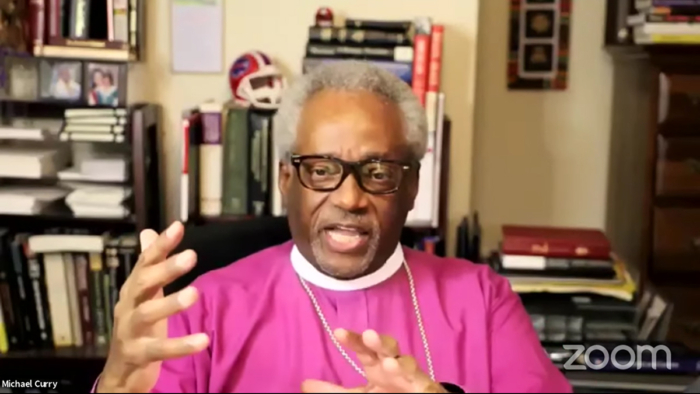 [Episcopal News Service] Presiding Bishop Michael Curry, in his Sept. 21 sermon during the opening day of the fall House of Bishops meeting, recalled a recent conversation with a fellow bishop about planning for The Episcopal Church’s future. Such conversations typically look ahead to the coming years, Curry said, “but in pandemic time, we can barely think a month ahead of time.”

This House of Bishops meeting is a prime example. The bishops’ twice-a-year meetings have been held online since the start of the pandemic in March 2020, but with vaccines against COVID-19 now widely available, the bishops had planned to gather Sept. 21-23 in St. Louis, Missouri, for their first in-person meeting in two years. Instead, the delta variant and the national surge in COVID-19 cases since July forced the bishops to cancel their face-to-face meeting and return to Zoom.

“So now we are here, not in St. Louis,” Curry told the bishops. “The miracle of vaccination has arrived, even with some boosters, and yet some refuse and the pandemic goes on.”

Curry wondered, will diocesan conventions be held in person this fall? Could the delta variant force further changes next year to the church’s General Convention and the Anglican Communion’s Lambeth Conference? “I don’t have any answers yet,” Curry said.

Curry spent much of his 25-minute sermon invoking the term narthex, the area of a church where people pass through to enter and exit, as a metaphor for this period of uncertainty and transition. “We are living in a narthex moment, between the world we knew and whatever is being born,” he said.

That moment was to be the focus of the bishops’ discussions with each other in the “table time” portion of the meeting’s opening day. The opening worship service was livestreamed on YouTube, but the rest of the meeting was closed to the public.

Before the bishops broke into smaller discussion groups, Utah Bishop Scott Hayashi posed three questions for them to discuss: What five words describe your experience with the pandemic? Where has God been present in this time? Have your goals as a bishop changed because of this time of pandemic, racial unrest and political division?

“I’ve had to take it into my heart to consider what has been lost and what has been gained,” said Hayashi, as he lamented that the bishops still could not have such conversations in person.

Curry, during his sermon described watching the 1953 movie “The Robe,” set in biblical times, and hearing echoes of today’s call for the church to reject the trappings of empire. He presented a vision of reformation in the church, away from the establishment and closer to Christianity’s origins in small gatherings.

This, he said, is a “church before collusion with the empire, the church that looks something like Jesus, the church that lived into ‘narthex,’ to let go of the ways things were, to behold the way things could be.”

“A community of small gatherings and congregations of all stripes and types, a human tapestry, God’s wondrous variety, the Kingdom, the reign of God, the beloved community, no longer centered on empire or establishment, no longer fixated on the preservation of institutions, no longer propping up white supremacy or in collusion with anything that hurts or harms any child of God or God’s creation – by God’s grace, a church that looks and acts and lives like Jesus.

“Welcome to narthex, and welcome to behold a new heaven, a new Earth, a new you, a new me, a new we.”