[Episcopal News Service] The suspension of in-person worship services early in the pandemic made the traditional passing of the offertory plate impossible, forcing Episcopal congregations to experiment with alternative ways of receiving offerings and pledge payments from parishioners.

Now that more congregations are gathering again in their churches, they should commit to maintaining the spirit of innovation in church stewardship, especially with digital tools, according to the clergy and lay leaders who participated in a recent panel discussion hosted by the CEEP Network.

“It is giving that propels the Gospel ministry forward. The gifts of the people are integral to the ministry of the church,” said the Rev. Suzanne Culhane, who serves as priest-in-charge at St. Philip’s Episcopal Church in Brooklyn, New York, and as canon for stewardship in the Diocese of Long Island.

Culhane also cited a recent Giving USA report that showed that charitable giving was up by 4% last year despite the sharp economic downturn starting in March 2020, when the COVID-19 pandemic was first declared. Church giving also was up overall, though “it really is specific to a particular location and context,” she said.

Culhane was joined June 23 on the Zoom webinar by the Rev. Charles Cloughen, the Diocese of Maryland’s planned giving consultant; Miriam McKenney, Forward Movement’s director of development and mission engagement; and moderator David Rocchio, who serves as director of stewardship and gift planning at Cathedral of St. Philip in Atlanta, Georgia.

Rocchio said the loss of the physical offering plate had a noticeable effect on revenue at the Atlanta cathedral last year. The cathedral resumed in-person services just before Easter and has begun passing the plate again, Rocchio said, and they are “getting back in the rhythm of things.”

McKenney said donations to Forward Movement increased last year, but now the Cincinnati, Ohio-based Episcopal organization is wondering whether the real financial impact will be felt this year, as the pandemic winds down.

“It’s difficult to know when and by how much things are going to change, in one direction or another, but as people of faith we’ve been on this journey for thousands of years,” she said.

Until comprehensive plate and pledge data included in the 2020 parochial report is released later this year, the pandemic’s full-financial impact on individual congregations and the church is unclear. The CEEP webinar’s panelists suggested anecdotally that some congregations have struggled while others have thrived during the pandemic.

That “uneven” experience that can be visualized as a bell-shaped curve, Culhane said. In the Diocese of Long Island, she figured about half of all congregations are in the middle, getting by financially as usual. A fourth have reported increases in giving, while the remaining fourth have fallen short of past revenue goals.

“The pandemic has given us a good opportunity to talk about what it means to be a disciple of Christ,” she said. “We are meant to keep on moving and growing dynamically, not just stand in one place,” Culhane said.

Growing dynamically over the past year often has meant reimagining stewardship and its related liturgical traditions. Culhane found that setting worshippers up for online giving achieved a better fulfillment rate on their pledges than in the past. Online software and app vendors also are strongly promoting text-to-give services, an option that is growing in popularity.

Rocchio said he has heard of churches that pass offertory plates outfitted with a credit card chip reader. The cathedral in Atlanta also has a payment kiosk in its atrium. “If you’re not giving folks electronic means to give you money, you’re leaving money on the table,” he said, adding that not offering electronic options could risk frustrating some tech-savvy worshippers. 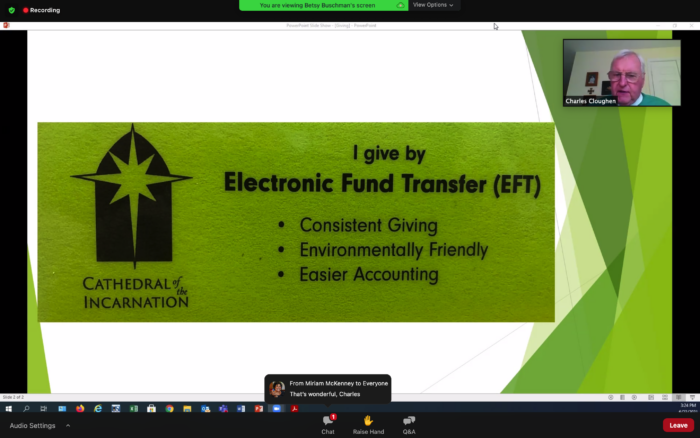 During a CEEP Network webinar on stewardship, the Rev. Charles Cloughen, the Diocese of Maryland’s planned giving consultant, explains the green cards that members of Cathedral of the Incarnation in Baltimore drop in the offering basket if they’ve given online.

At Cathedral of the Incarnation in Baltimore, Maryland, in-person worship has resumed, but there is no passing of the plate at the offertory, Cloughen said. Instead, worshipers can drop money into a basket at the end of the pew or they are encouraged to give online or by text.

For those who give online but who still want to participate in a tangible way during services, the cathedral provides little green cards for them to drop into the offertory basket during in-person worship, Cloughen added.

McKenny said her church, Calvary Episcopal, was able to set up many of its members for automatic online giving, weekly or monthly. Parishioners have kept up with their pledges, she said, with regular support and encouragement from church leaders.

“It’s about continuing to tell the story of God’s love for us, and that God always keeps God’s promises,” she said. “We have a faith and belief in God’s abundance.”

Rocchio said he has talked to parishioners by phone about their experiences during the pandemic and the importance of stewardship in living out one’s faith. Culhane likes to devote part of the prayers of the people to thanking those who have given gifts for specific purposes, as well as thanking volunteers who serve on the finance and stewardship committees. Cloughen, too, is a proponent of thanking worshipers for their contributions prominently and often – and of the need to “connect what they’re giving with the wonderful ministries that are being done in the parish.”

“I do not know a parishioner who left a parish because they felt appreciated and thanked,” he said.

The CEEP Network, formerly known as the Consortium of Endowed Episcopal Parishes, has ramped up its offering of free webinars during the pandemic. Video of the webinar on stewardship can be viewed on the network’s website.