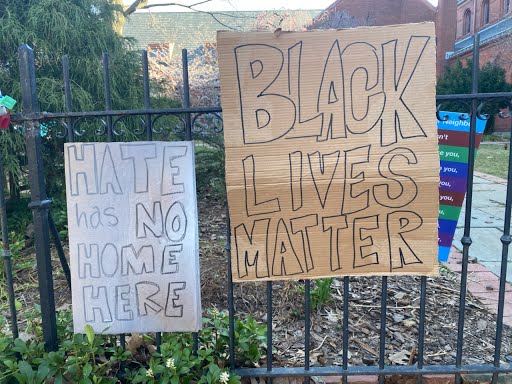 Following a March 26 incident of racial hatred on the grounds of St. Mark’s Episcopal Church on Capitol Hill in Washington, D.C., signs of support appeared outside the church. Photo: St. Mark’s

[Episcopal News Service] On the morning of March 26 a noose was found hanging from a branch of the largest tree in the courtyard of St. Mark’s Episcopal Church on Capitol Hill in Washington, D.C., according to local news reports.

The rope fashioned as a symbol of racial hatred comes after two Black Lives Matter signs have been stolen from the church over the last few months, most recently on March 13, the Rev. Michelle Morgan, St. Mark’s rector, told the DCisit.

After the symbol of hatred was removed from the tree, Washington Bishop Marianne Budde, the police officer who’d responded to the call and Morgan prayed around the tree, “reconsecrating the space and blessing the tree and the sacred space of our church,” wrote Morgan in a message to the congregation later that day. “That symbol of hatred has no place in our churchyard, in our city, or our country. I know that this symbol causes fear in people’s hearts.”

Following the incident, the church received support from its neighbors, racial justice allies, Episcopal churches and Episcopalians nationwide, she said.

“Past parishioners from all over the country have checked in, asking if they can do something. I received a call from a woman who is willing to stop by and check on the church and another who is ready to come and walk people to their cars. Signs have started to appear on our fence in support, and it continues,” Morgan said.

“Our commitment to seeing everyone as a beloved child of God remains. We will seek and serve Christ in all persons, and we will continue to do our work to bring more light, more love, and more God into the world.”

D.C.’s Metropolitan Police Department is investigating the incident as a possible hate crime, according to CNN.