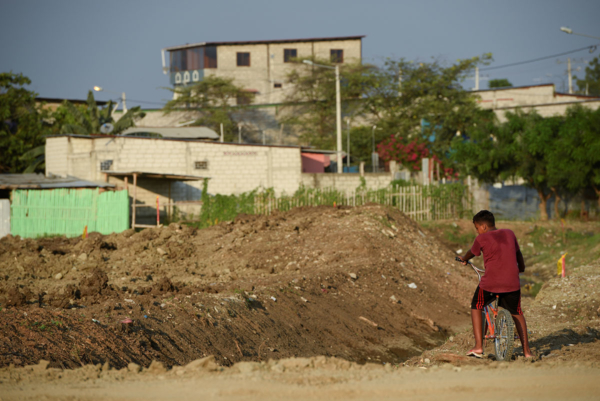 A boy on a bicycle looks at the construction site for a new cemetery in Guayaquil, Ecuador, on April 23, 2020. Ecuador’s COVID-19 death toll is among the highest in the world. Photo: Santiago Arcos/REUTERS

[Episcopal News Service] Every night at 8 p.m., Diocese of Ecuador Litoral Bishop Cristóbal León Lozano prays for Episcopalians in his diocese who have contracted COVID-19. In mid-March, the list included just four names, but by Holy Week, the list spanned seven pages. He also keeps a separate prayer list for families in need of health services and protection.

“The fear is real; we all feel death is around us,” Lozano told Episcopal News Service. “Our clergy are coping with the emotional toll of everyone around them. This is why we meet virtually every day; we pray, talk and cry if we need it.”

In early April, shocking images went viral of corpses left on the streets in Guayaquil, a port city southwest of Ecuador’s capital Quito. The images depicted a perfect storm: In late March, the government imposed a strict 15-hour curfew limiting citizens’ mobility; the state’s health care system collapsed with rising infection rates; and its morgues and mortuaries exceeded capacity, forcing families to live alongside the bodies of those who’d died at home.

Like their counterparts worldwide, The Episcopal Church’s Latin America-based Province IX dioceses have moved much of their pastoral work online and have continued some in-person outreach to their communities despite government-imposed lockdowns, but the situation in Guayaquil has laid bare a system in collapse.

“It is hard to trust the official death toll because people are dying at home,” Lozano said, adding that the health care system’s collapse makes the actual numbers and cause of death difficult to certify, and that the risks associated with family members caring for infected patients at home has intensified the virus’ spread. “The risk of contracting the virus on the streets is now higher,” he said.

The Episcopal Church’s seven Province IX dioceses cover the U.S. territory of Puerto Rico and five countries in Latin America and the Caribbean: the Dominican Republic, Honduras, Venezuela, Ecuador and Colombia. The province’s bishops meet online weekly to share information about what’s happening in their dioceses and their countries, and to offer support to one another.

“We all are having a tough time,” Puerto Rico Bishop Rafael Morales, who also serves as the province’s president, told ENS. “I personally even had to celebrate a funeral by phone the other day, but our brothers and sisters in Ecuador are off the charts. They have our support, and they are in our daily prayers.”

Amid the chaos and despair, the church’s call is to offer spiritual and emotional support, which is a challenge while being under lockdown. Still, the creativity shown by clergy and laity to maintain a sense of community using online tools has impressed the Rev. Glenda McQueen, The Episcopal Church’s partnership officer for Latin America and the Caribbean.

“We went from asking what to do if the temples should remain closed to confirming that we all are the church. We are a community no matter where each person is, and technology is keeping us connected,” McQueen said.

Like many Episcopal churches, the Latin America-based churches are livestreaming Sunday Eucharist and keeping in touch via Facebook, WhatsApp and other messaging apps to maintain connection and pray for one another at a distance.

“We have had to reinvent ourselves. We have put all our effort and heart into working with technology, but that heart is beating hard in the lives of our communities,” Morales said.

Episcopal and Anglican dioceses in Panama, El Salvador, Colombia, and Ecuador confirmed to ENS that they are using online platforms to be in touch with their parishioners. However, in dioceses like Venezuela, where internet access is limited and where the country has been undergoing a dramatic political crisis for years, the challenge is harder.

Coromoto Salazar, a member of the Diocese of Venezuela’s Standing Committee, said clergy are working around unstable internet connections by recording sermons and prayers and sending the audio files to parishioners via WhatsApp and using landlines to stay connected to elderly, less technologically nimble parishioners who may be isolated and alone.

“We make [landline] calls to check on people. We have chat groups. We are doing everything to feel that we are in this together. A large group of our parishioners are elderly, so they are at high risk of contagion and some of them live alone,” Salazar said.

The standing committee also approved a stipend for struggling clergy, she said.

In the Diocese of Honduras, where in rural areas access to computers and the internet is scarce, smartphones have allowed churches to maintain connection, and even some training programs have carried on via WhatsApp, Bishop Lloyd Allen said.

The diocese is also working to support its clergy who are struggling financially, and then there are the diocese’s own financial concerns. “We might only survive like this for two more months,” Allen told ENS.

In Colombia, the government’s quarantine allowed churches to continue providing social assistance in their communities, and the diocese has been able to continue operating some of its parish-based feeding programs, said Colombia Bishop Francisco Duque Gómez.

The diocese has focused its food pantry program on meeting the needs of the elderly; people ages 70 and older have been told not to leave their homes under the South American nation’s quarantine regulations. The diocese is also participating with others to feed Venezuelan migrants who are returning to their home country because of the lockdown, which prevents them from working and feeding themselves and their families. Venezuela has been suffering from an ongoing political and socioeconomic crisis over the last decade, with its residents fleeing to neighboring countries for work and protection. Moreover, migrants and asylum-seekers have fled poor economic and security situations throughout the Americas, but particularly Central America’s Northern Triangle – El Salvador, Guatemala and Honduras.

“As a church, we are watching that the government guarantees that the restrictions imposed do not violate human rights,” El Salvador Bishop David Alvarado said.

The Diocese of El Salvador has a long history of defending human rights, going to back to the country’s civil war. Cristosal, a leading human rights organization in the region that was born out of the Salvadoran church’s longstanding connection with U.S. Episcopalians, continues to defend human rights and respond to forced displacement in the region.

In the long term, bishops are bracing for high levels of unemployment, food scarcity and other public health emergencies, while trying to be present and prepare for the future.

“This will pass, and then we will have a lot of work to do. Being under lockdown must help us to grow and to be ready for the next stage,” said Morales, the bishop of Puerto Rico. “We are celebrating Easter these days; may God pass by our lives and makes us stronger to keep moving forward with his protection.”