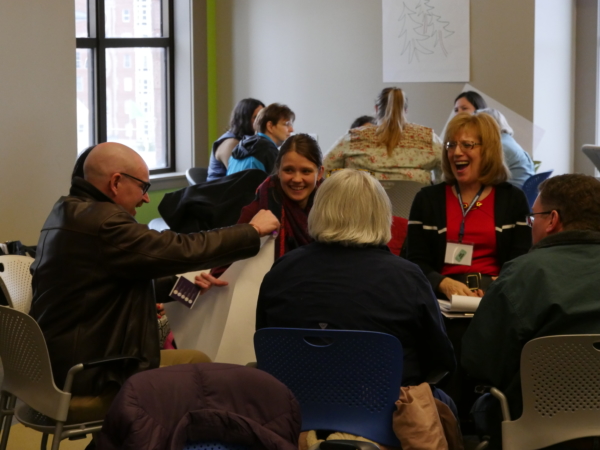 Participants talk in a small group session at the Rooted in Jesus conference in Atlanta, Georgia, on Jan. 23, 2020. Photo: Egan Millard/Episcopal News Service

[Episcopal News Service – Atlanta] As The Episcopal Church grapples with how to stem its steep decline in an increasingly secular culture, the first-ever Rooted in Jesus conference offered a chance to share innovative ideas, collaborate and celebrate. Nearly 1,400 people attended the conference, held Jan. 21-24 at the Crowne Plaza Hotel and various venues in Midtown Atlanta and hosted by the Episcopal Church Foundation in partnership with The Episcopal Church and several other Episcopal organizations. Dozens of presentations and workshops were offered by influential figures and groups from across The Episcopal Church on topics like digital evangelism, civic engagement, environmental justice, liturgical renewal, preaching on current events and welcoming younger generations into the church. 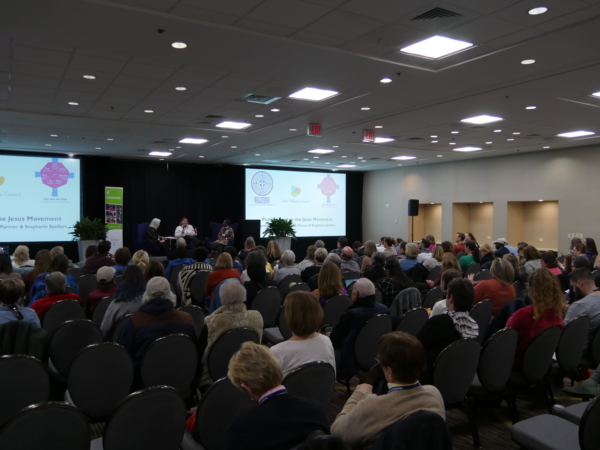 “Putting Feet on the Jesus Movement” was one of the dozens of presentations offered at the Rooted in Jesus conference. Photo: Egan Millard/Episcopal News Service

The conference got off to a lively start with a passionate address from the Rev. William Barber II, founder of the Moral Mondays movement and leader of the Poor People’s Campaign, who warned of the moral dangers of worshipping God without a conscience that responds to the needs of one’s neighbors. After his speech, about 2,000 people packed the arena at Clark Atlanta University for a rousing revival service featuring choirs, multilingual prayers, testimonials, and of course, Presiding Bishop Michael Curry. 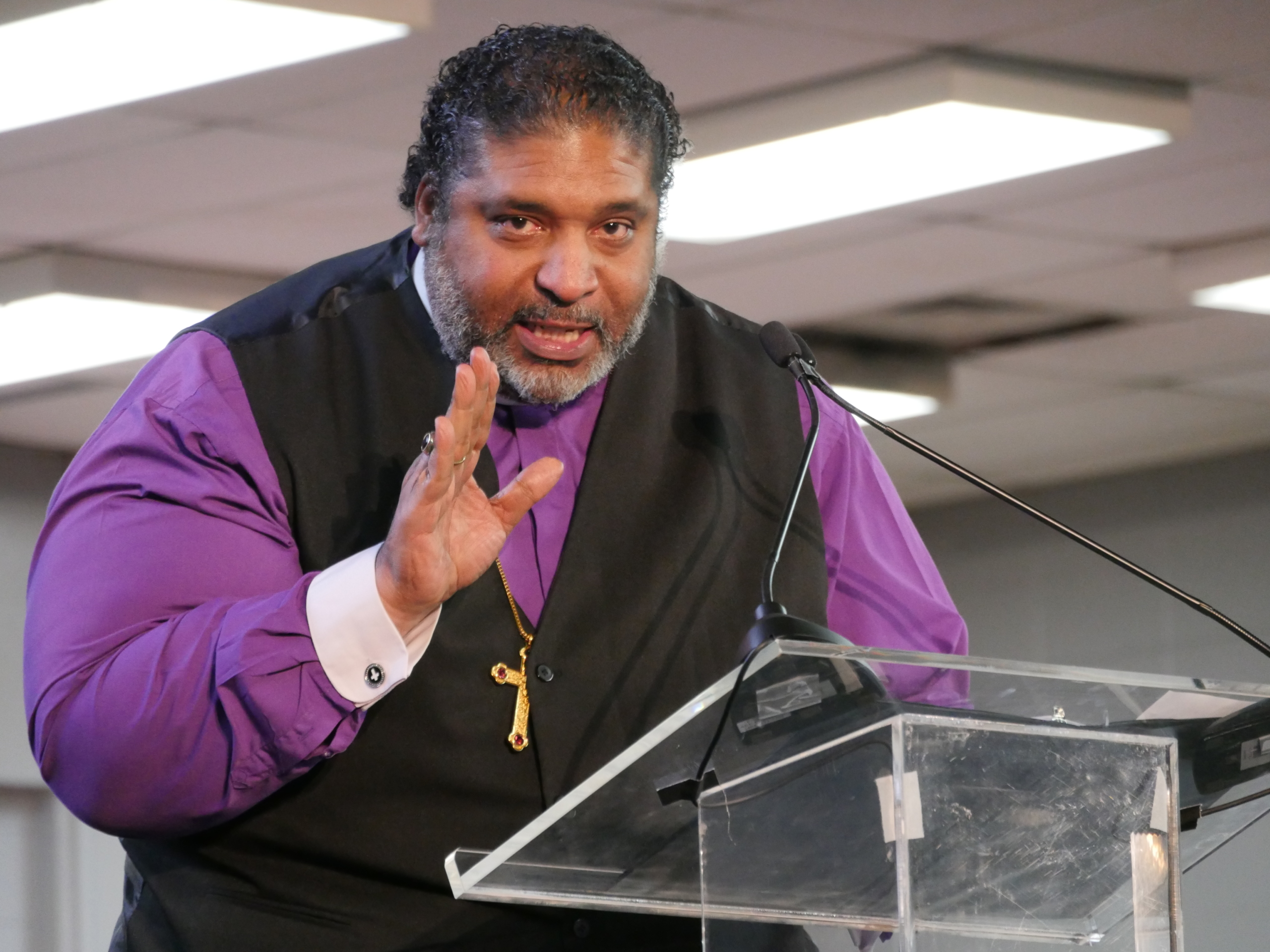 Attendees could hear presentations like “Lonely, Thirsty, Hungry People,” in which Jerusalem Greer, The Episcopal Church’s staff officer for evangelism, talked about the loneliness epidemic that is infiltrating every demographic group in American society and how churches are uniquely equipped to fight it, or “Evangelism for Shy People,” in which the Rev. Frank Logue, Diocese of Georgia’s bishop-elect and canon to the ordinary, offered tips for Episcopalians who don’t feel comfortable talking about faith. Participants also could attend panel discussions like “Where Is the Modern Liturgical Movement Taking Us?” which addressed the meaning of liturgy in the 21st century and how liturgical revisions might make it more relevant, and small group sessions like “Queering the Church” and “Sacred Resistance in the Pulpit.” 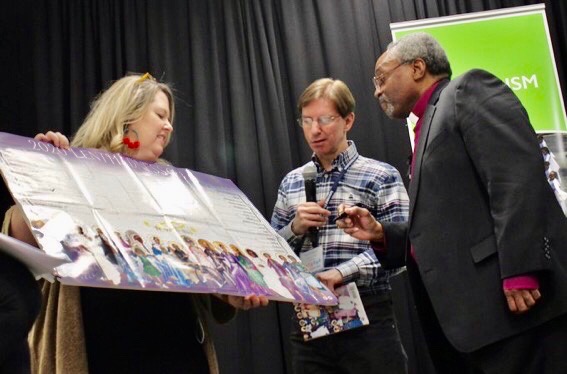 Presiding Bishop Michael Curry makes his selections for Lent Madness, the bracket-style tournament of saints developed by the Rev. Tim Schenck (center), at the Rooted in Jesus conference in Atlanta. Photo: Jason Merritt

They could even watch “Pitchtank,” part of the TryTank innovation project from Virginia Theological Seminary and the General Theological Seminary. Styled after “Shark Tank” – the reality show in which entrepreneurs pitch business ideas to investors – the event featured several contestants pitching their ideas for innovative ministry projects to a panel of judges for the chance to win a partnership with TryTank and up to $5,000 to launch and run their experiment.

Attendees also got to experience the first preview of “Embracing Evangelism,” a six-part evangelism video course developed by The Episcopal Church and Virginia Theological Seminary. The videos, which will be available to download this spring, offer new methods of spreading the teachings of The Episcopal Church, using group exercises and personal stories to demystify and unpack complex topics.

In addition to discussions of experimental and creative new modes of ministry, there were also workshops and lectures that focused on the immediate challenges of the church, such as “Discovering the Vitality in Small and Rural Churches” and “Preaching in the Era of Division,” as well as lessons on the more practical elements of ministry, like how to schedule a program year, write grant applications and build an endowment.

I’m glad to be with my Episcopal friends and my dear brother @PB_Curry at #Rooted2020 today. pic.twitter.com/oQM6Q77n0r

But there was much more than the typical conference agenda of presentations, workshops and lectures. Curry and Barber recorded a podcast episode live from one of the conference ballrooms. On the top floor of the Crowne Plaza Hotel, attendees could experience the Sacred Space prayer room, a cozy experiential worship space designed by Lilly Lewin with art installations, craft stations and sweeping views of Atlanta. Prayer services and informal gatherings created a strong sense of community, strengthening the bonds of friends and colleagues and forging new ones. 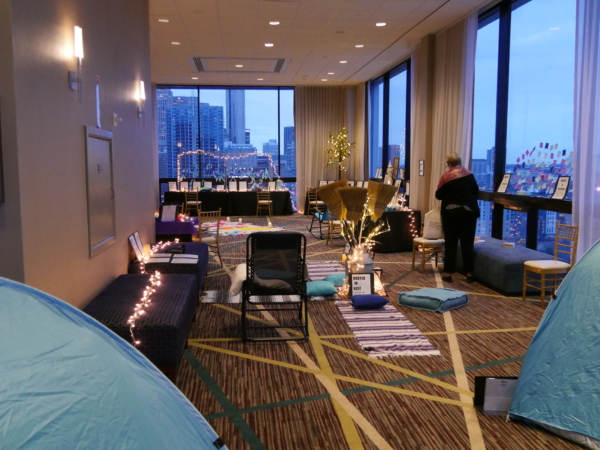 “I think what’s really striking is just the sheer size of this conference – that this many people are excited enough to get on a plane or get in a car and come to Atlanta to talk about discipleship and evangelism and the church,” said the Rev. Scott Gunn, the executive director of Forward Movement, one of the conference’s sponsors. “It feels like The Episcopal Church has turned a real corner in the last few years and it’s very exciting.”

“It was good to see the community gathered, especially the lay community, to deepen our ministry experiences, and to meet each other, because we’re from all across the church. And I think it’s a model for how we can probably do General Convention, where we can combine a legislative agenda and programmatic agenda,” said Annette Buchanan, former president of the Union of Black Episcopalians. 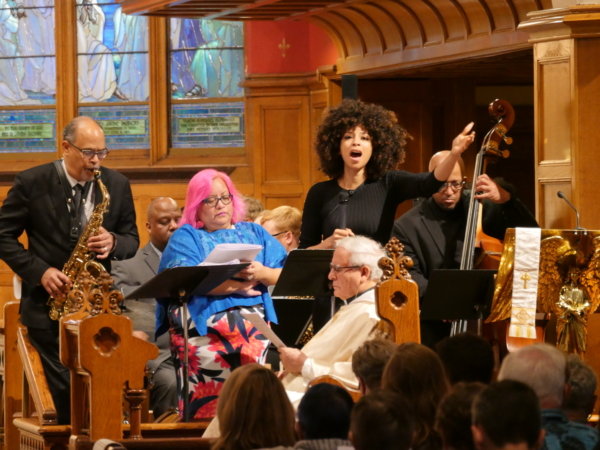 Musicians lead the congregation in song during the closing Eucharist of the Rooted in Jesus conference at All Saints Episcopal Church in Atlanta, Georgia, on Jan. 24, 2020. Photo: Egan Millard/Episcopal News Service

The conference closed with a packed Eucharist at nearby All Saints’ Episcopal Church, during which the Rev. Mark Jefferson echoed one of the recurring themes of the conference: to truly be followers of Jesus, we must “get our hands dirty” and abandon our notions of “comfortable Christianity.” 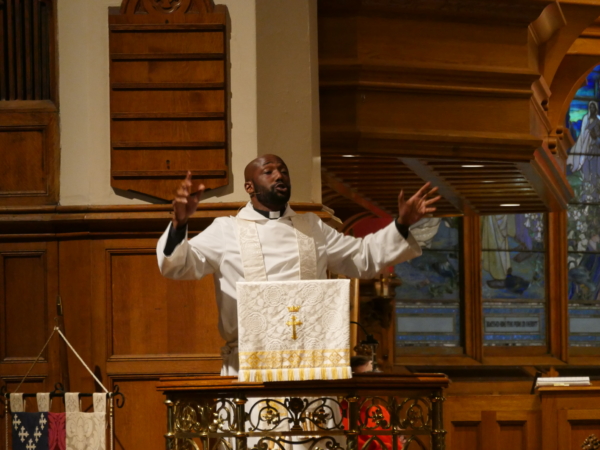 “We must understand that liberation in the context of oppression is embodied grace,” Jefferson said, to shouts of “Amen!”

While there are no immediate plans to make Rooted in Jesus a recurring event, organizers have said it may be a possibility.

“Rooted in Jesus has been such a success,” said Melissa Rau, senior program director of leadership for the Episcopal Church Foundation, thanking the sponsors, host venues and attendees. “But what will make it even more successful is if you’re able to take all the great stuff that happened here over the last few days, resonate with it, think about it, really implement some of the stuff you learned, and move forward with it so that it will truly undergird what we’re trying to do in this Jesus Movement we find ourselves in.”

– Egan Millard is an assistant editor and reporter for the Episcopal News Service. He can be reached at emillard@episcopalchurch.org.