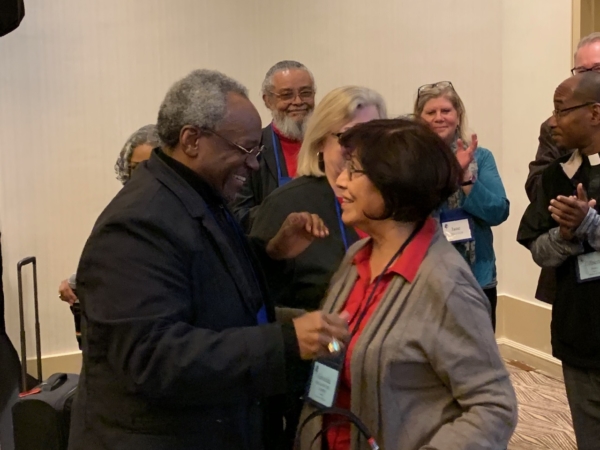 [Episcopal News Service – Salt Lake City, Utah] Amid the detailed and sometimes tense discussions that took place during the meeting of The Episcopal Church’s Executive Council from Feb. 13-15, moments of joy and excitement burst forth. Among the highs of the meeting were the selection of Louisville, Kentucky, as the site of the 2024 General Convention and the formal approval of the readmission of the Episcopal Church of Cuba as a diocese of The Episcopal Church, which elicited an enthusiastic and emotional response from those gathered.

Executive Council, a 43-member body tasked with enacting the policies adopted by General Convention, meets at least three times per year. The Rev. Gay Clark Jennings, vice-chair of council and president of the House of Deputies, presided over the meeting at the Hilton hotel in downtown Salt Lake City. Presiding Bishop Michael Curry arrived on the meeting’s second day after recovering from a bout of food poisoning.

The meeting opened with a somber presentation from several leaders in Native American communities on the deep and lasting impacts of the racist “Doctrine of Discovery.” Forrest S. Cuch and the Rev. Michael Carney of the Diocese of Utah, the Rev. Cornelia Eaton of Navajoland and the Rev. Angela Goodhouse-Mauai of North Dakota shared, through personal and historical narratives, how the church can be an instrument of oppression and erasure of Native peoples or a source of strength and empowerment for them. 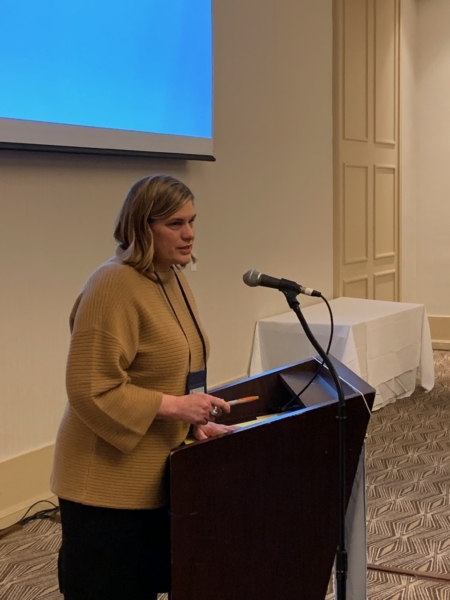 After a day packed with committee meetings, council reconvened on Feb. 14 to hear a presentation from Kristine Stache, interim president of Wartburg Theological Seminary, an Evangelical Lutheran Church in America affiliate. Stache spoke about how to interpret and respond to The Episcopal Church’s membership decline, as depicted in the most recent parochial report data.

Stache started off with a brutally honest look at those “very sobering” statistics. If the rate of decline experienced over that decade continues, The Episcopal Church will have no Sunday attendance in 30 years and no baptized members in 47 years. As with other mainline Protestant denominations, the Evangelical Lutheran Church in America has experienced a similar decline, with 35 years left until it runs out of baptized members and 23 years until it runs out of Sunday worshipers, if current rates continue.

“It depicts a church that appears to be dying,” Stache said. “Perhaps.”

But, she argued, other signs show a church that is not dying but transforming.

“How is this measured? Through changed lives, which is not one of the questions, I believe, on the parochial reports of the ELCA. … Perhaps the structures and forms of the way we measure church are dying.”

Stache encouraged council to see this difficult transformation as a sign of God’s presence, not God’s absence, citing Isaiah 43:18: “Do not remember the former things, or consider the things of old. I am about to do a new thing. Now it springs forth; do you not perceive it?”

While “innovation” has become the buzzword of choice in discussions of how to deal with these changes, Stache said, it often consists of creating new pathways to traditional models of ministry or coming up with solutions to perceived problems. But that’s not what the word really means, or what the church needs, she argued.

“Innovation gives us permission to say, ‘We don’t have it figured out. But we trust that God has a future and it includes the church.’”

Instead of coming up with new ways to keep the church as we know it afloat, we should ask new questions and experiment, creating “a culture of failure by which we learn something.”

The church should become something truly new, “something we have yet to imagine,” Stache said. “This kind of thinking looks nothing like we’ve ever done before. We don’t have the current knowledge or solutions to address this work. In fact, we can’t even define the problem. But that’s the point. Living in this space is about a mental shift to a focus on questions instead of answers.”

That mental shift was already apparent in a discussion of potential changes to the metrics of parochial reports in the Governance and Operations Committee. The Rev. Chris Rankin-Williams, chair of the House of Deputies Committee on the State of the Church, led a discussion of that committee’s work on proposed revisions to the questions parishes are asked.

“We’re trying to get data on – what are the actual markers of vitality?” Rankin-Williams said.

Rankin-Williams expressed a desire – shared by members of the Governance and Operations Committee – to move away from average Sunday attendance as the defining metric of a parish’s health. Other metrics – like weekly service attendance, number of people involved in volunteer activities or the total reach of those activities – might provide a fuller picture, he said.

The committee also discussed having a section in which the parish can write its own narrative, so it doesn’t feel like it’s being “graded” by the wider church. Rather than being a burden, the report could be a chance for a parish to do some valuable discernment and tell its own unique story.

On Feb. 15, the committees presented their reports to council and all resolutions were passed unanimously. Among them was a resolution to accept the recommendation from the Joint Standing Committee on Planning & Arrangement to select Louisville, Kentucky, as the site for the 81st General Convention in 2024. The Rev. Michael Barlowe, secretary of council, said Louisville and the two other finalists – Detroit, Michigan, and San Juan, Puerto Rico – were in the same range in terms of cost to the church and convention goers, but Louisville stood out for a few reasons.

The last time General Convention met in Province IV – which contains the Diocese of Kentucky – was in 1982 in New Orleans. It’s also Curry’s home province, and this will be his last General Convention as Presiding Bishop. Accessibility was another factor. Louisville is within a day’s drive of 60 percent of the U.S. population, Barlowe said, and the city’s brand-new convention center, several hotels, the Episcopal cathedral and an arena big enough for a revival are all within a 5-minute walk. Having General Convention there will also present a chance to highlight the city’s “breathtaking” work on racial reconciliation in recent years, Barlowe said. 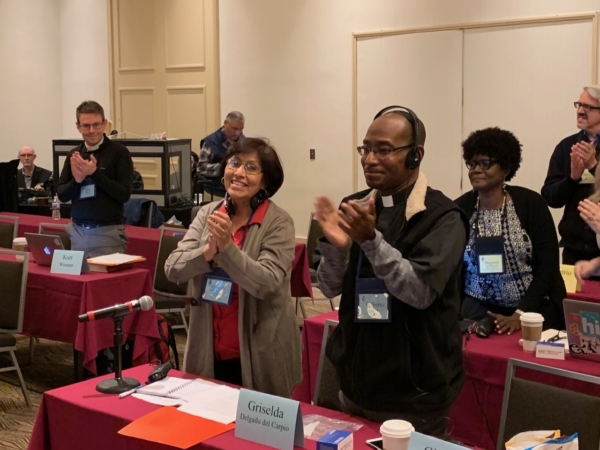 Bishop Griselda Delgado del Carpio of Cuba and the Rev. Gilberto Junco Sotolongo of Cuba join in a round of applause after the formal readmission of their church into The Episcopal Church on Feb. 15. Photo: Egan Millard/Episcopal News Service

“Our friends from the Episcopal Church in Cuba have been exemplary,” Barlowe told council, “not only in their extraordinary ministries undertaken in such difficult circumstances over the years, but in all of our conversations over the last five or six years as we’ve moved toward this moment.”

“Each one of us has been living [through] a very emotional time in our life in the Diocese of Cuba,” Delgado said, “because the church lived for more than 50 years all by itself. 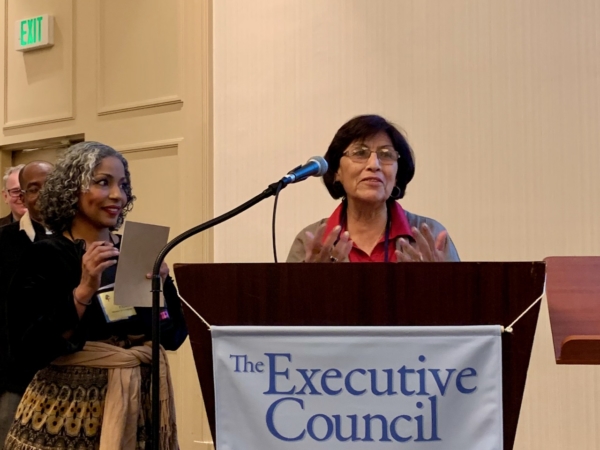 “I want to express my gratitude to each one of you … who has worked so arduously to achieve this moment. … We will continue serving our people, our country – however, we will do it in your company.”

Other resolutions adopted by council included a statement urging Episcopalians and political leaders to fight misinformation and enact election security measures in the United States and elsewhere, an assessment waiver for the Diocese of Alabama, and the adoption of a Covenant for Care of Creation and a plan for its implementation. After a blessing from Curry, the meeting was adjourned on a high note.

“We spent Valentine’s Day apart from our loved ones because we love Jesus,” Bishop-elect Frank Logue of Georgia told council on the final morning.

This story will be updated when a full list of resolutions is available. The next council meeting will take place from June 8-11 in San Juan, Puerto Rico.

Executive Council meeting kicks off in Salt Lake City with presentation on racism’s... Primates of The Episcopal Church and Anglican Church of Mexico sign bilateral...