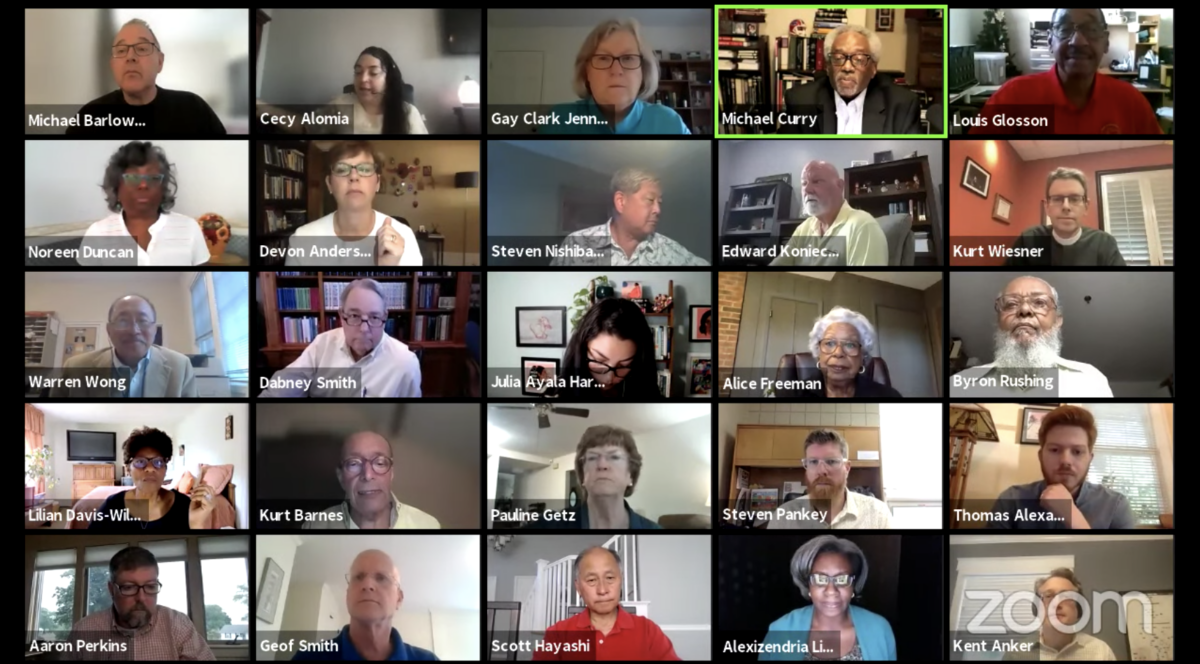 The opening plenary session of Executive Council on June 25, 2021.

[Episcopal News Service] Themes of racial justice, including the experience of people of color within The Episcopal Church, the persecution of Indigenous peoples in North America and plans to extend and magnify the church’s existing truth and reconciliation efforts, dominated the work of the church’s Executive Council during its June 25-28 virtual meeting.

Presiding Bishop Michael Curry opened the meeting by announcing the formation of a new truth and reconciliation working group tasked with building on the church’s existing antiracism efforts and extending them to every corner of the church. The group will develop proposals for the 80th General Convention, scheduled for July 2022 in Baltimore, Maryland, “that will foster and facilitate the convention’s adoption of a plan and pathway for a process of truth and reconciliation in The Episcopal Church,” Curry said.

The results of the Racial Justice Audit of Episcopal Leadership were presented to the entire council for the first time, with facilitators from the Mission Institute – which conducted the audit – breaking down the nine dominant patterns of racism it identified. The full 72-page report based on the survey responses of 1,300 church leaders was released to the church in April.

In small groups and committee meetings, council members shared their reactions to the findings of the audit, including the lack of access to power that people of color experience in the church and the stress they experience from being held to unreasonable expectations, feeling invisible or hypervisible. Members expressed their satisfaction with the thoroughness of the audit, but also their frustration with the church leaders who did not participate, including most bishops. Most of all, council members stressed the importance of getting the audit’s conclusions in front of Episcopalians at the congregational level who may not be tuned in to the work of Executive Council.

For more information on the racial justice audit, click here. Click here to register for the June 29 webinar, “The Racial Justice Audit: Where Do We Go from Here?”

Members also used their committee meetings to reflect on their experiences at the last two in-person council meetings: Montgomery, Alabama, in October 2019 and Salt Lake City, Utah, in February 2020. At both meetings, council members witnessed powerful testimonies of the racism that pervades America’s past and present. In Montgomery, council visited the National Memorial for Peace and Justice and heard from “Just Mercy” author Bryan Stevenson. In Salt Lake City, members heard presentations from Indigenous leaders on how the “Doctrine of Discovery” dehumanized Native Americans. Some members said council had not taken the time to process what they learned at those meetings and took advantage and used committee meeting time over the weekend to do so, focusing on how what they learned in Montgomery and Salt Lake City applied to current issues affecting African Americans and Native Americans.

Joint Standing Committees for Mission Within and Mission Beyond The Episcopal Church members discussed the recent discoveries of hundreds of unmarked graves at Native residential schools in Canada and what they might mean for The Episcopal Church, which was involved in the operation of some Native American residential schools in the United States. The purpose of the Native American residential schools – some of which were operated by churches and some by the federal government – was “to culturally assimilate Indigenous children by forcibly relocating them from their families and communities to distant residential facilities where their American Indian, Alaska Native, and Native Hawaiian identities, languages, and beliefs were to be forcibly suppressed,” according to U.S. Secretary of the Interior Deb Haaland. Council members discussed Haaland’s June 22 order for her department to investigate possible burial sites at residential schools, and what that investigation might yield. Many students endured abuse and neglect at the schools, Haaland has said, and many died without their parents ever knowing their resting place.

Council members and church staff discussed the need for a deeper understanding of The Episcopal Church’s involvement in Native American residential schools. The Rev. Bradley Hauff, the church’s missioner for Indigenous ministries, said The Episcopal Church had some involvement in the operation of between nine and 18 residential schools from the 1870s to the mid-20th century; the specifics are difficult to say, Hauff said, because records of those schools are few and far between.

Hauff and other Native leaders also shared their families’ histories with the residential school system – stories reflecting a range of experiences, from positive to devastating – and Hauff raised the possibility that unmarked graves could be found at the sites of former Episcopal residential schools. Possible actions and responses were discussed, but members agreed that council needed to learn more about the issue first, including by looking at how the Anglican Church of Canada apologized for its involvement with residential schools. Though then-Presiding Bishop Katharine Jefferts Schori issued a letter repudiating the Doctrine of Discovery on behalf of The Episcopal Church in 2012, the church’s involvement with residential schools was not mentioned. It was mentioned as an example of an appropriate historical topic to learn about in a 2018 General Convention resolution that stated any Episcopal antiracism program must include a historical component.

“We participated in this and forced assimilation and acculturation, this form of genocide. And I do not believe it’s ever been acknowledged,” Hauff said during a Mission Within Committee meeting. Committee members said they would proceed by consulting other Indigenous leaders and communities in The Episcopal Church and the Anglican Church of Canada and gathering more information.

Council also heard a presentation from the Episcopal Church Office of Government Relations on how the church might become involved with deradicalization efforts in the United States. Spurred by the Jan. 6 insurrection at the Capitol, Executive Council at its January meeting committed the church to engage in the work of countering the rise of violent white supremacy and Christian nationalism in America by offering people at risk of falling into those groups an alternative place to belong. The Office of Government Relations presented three options representing baseline, moderate and significant investments in such work. Council members will be surveyed about their reactions to the presentation and next steps will be decided at council’s next meeting in October.

On June 28, council adopted a resolution supporting proposed legislation in Congress that would designate “Lift Every Voice and Sing” as the United States’ national hymn. The hymn, sometimes referred to as the Black national anthem, celebrates African Americans’ struggles for freedom and is often sung in Episcopal churches. Its author, James Weldon Johnson, is listed in The Episcopal Church’s calendars “Holy Women, Holy Men” and “A Great Cloud of Witnesses.” After some debate over whether a national hymn was appropriate in the context of a rise in Christian nationalism and whether the male-centric lyrics were exclusionary, a resolution to direct the Office of Government Relations to advocate for the designation was adopted.

The Rev. Mally Lloyd, chair of the Executive Council Finance Committee, said her committee had gone through the church’s 2022 draft budget line by line. Because diocesan incomes are down, there will likely be a decrease in diocesan assessment payments, Lloyd said; the current version of the budget assumes a 2% decrease in revenue from diocesan assessments and results in a $3.3 million deficit, mostly due to extra expenses related to the 80th General Convention, which is often the case in a General Convention year, Lloyd said. However, she noted, there is a projected surplus of $1.39 million from the 2021 budget.

The Finance Committee also reviewed requests from the Province IX dioceses for further financial relief and assessment waivers. Lloyd said the committee would try to meet with a representative from each of the dioceses in July to hear about what each diocese is experiencing.

Lloyd also reported that the process of moving the Archives of The Episcopal Church from the Seminary of the Southwest to a new location in Austin, Texas, is almost complete. Council adopted a resolution thanking the seminary for hosting the archives since 1957.

Executive Council’s next meeting is scheduled for Oct. 25-28 in Linthicum Heights, Maryland, although the logistics of that meeting – such as whether it will be fully in-person or an in-person/virtual hybrid – are still in progress.