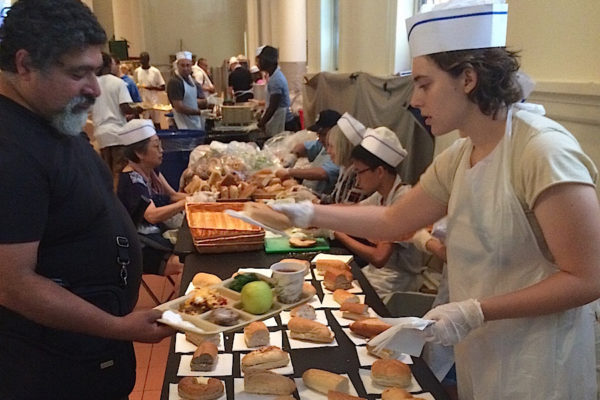 Holy Apostles Soup Kitchen in Manhattan is one of the largest soup kitchens in the nation. In response to the coronavirus pandemic, it is serving bagged lunches rather than hot, plated lunches beginning March 16. Photo: Episcopal News Service

“One of the reasons I’m glad that we suspended [worship] services is that it allows our leaders who have these really important ministries to focus their energies there,” Washington Bishop Mariann Budde told Episcopal News Service in a March 13 telephone conversation. “And that’s what’s happening … It was really important that we maintain those ministries, but also enter into them with wits about us in terms of how to serve people in environments in close proximity.”

The dioceses of Washington and Virginia were among the first to suspend in-person worship services for at least two weeks as a precaution aimed at stemming transmission of COVID-19, or the new coronavirus, which the World Health Organization declared a global pandemic on March 11. The dioceses’ announcement affected more than 250 congregations in Washington, D.C., and suburban Maryland and Virginia. Other dioceses, including New York, Southern Virginia, Delaware, California and all four Michigan dioceses, have since taken similar measures. Click here for information on individual dioceses.

Across the Diocese of Washington, groups of clergy and lay members have self-organized to share ideas, practices and information from civic partners and public health officials regarding the continuation of services to the vulnerable populations that depend on them without putting those in need of services and those providing services at greater risk, Budde said.

Charlie’s Place is one such ministry in Washington, D.C., Budde said, that continues to provide meals and services to homeless people from its base at St. Margaret’s Episcopal Church near Dupont Circle. Another, the Church of the Epiphany on G Street, serves people downtown, and Church of the Ascension works with vulnerable populations to the south in Lexington Park, Maryland.

In a March 12 message to clergy, Virginia Bishop Susan E. Goff included recommended best practices for food banks and food ministries, such as limiting the number of people allowed in at one time, documenting who’s handling groceries, maintaining reserves and preparing quarantine boxes.

An estimated 550,000 people are homeless in the United States, and food insecurity poses a threat nationwide, where 11 percent of households suffered food shortages at some point in 2018, according to the most recent data from the U.S. Department of Agriculture.

“During these challenging times, we need to be especially aware of our neighbors in need. We have a responsibility to protect those who are most vulnerable through our collective actions, primarily through social distancing. But that means we must also find new ways to care for one another –financially supporting organizations that are continuing to provide services, calling our neighbors to see how they are faring and what they need and recognizing the disruption and hardship this pandemic is causing,” said Rebecca Linder Blachly, director of The Episcopal Church’s Washington, D.C.-based Office of Government Relations.

Her office, she said, is “pushing the U.S. government to put more protections in place, including family leave, paid sick leave, unemployment insurance and a robust social safety net.”

On March 13, the Office of Government Relations released a Public Health and Policy Advocacy Document in response to the spread of the coronavirus.

It offers a reminder that Christians have the obligation to care for people who are poor, sick, imprisoned or strangers, as called for in Matthew 25:34-46. It also suggests that churches encourage everyone to adhere to the Centers for Disease Control and Prevention’s recommended ways of reducing the spread of the coronavirus. The CDC also includes specific recommendations for faith communities.

As of March 12, the virus was reported to have spread to 46 states and the District of Columbia, and President Donald Trump declared a national emergency, allocating $50 billion in funds to fight the epidemic in the United States and its territories – all areas where The Episcopal Church has a presence. For now, coronavirus-related restrictions vary widely across rural, urban, suburban areas served by the church.

In Kansas City, Missouri – an area relatively untouched by COVID-19 as of March 12 – a soup kitchen run by an Episcopal-affiliated nonprofit will continue serving free meals every weekday, with a few potential changes. Kansas City Community Kitchen feeds 400 to 500 per day, many of whom have a higher risk of contracting the virus, according to the Rev. Gar Demo, board chair of the nonprofit.

“Since we’re serving a primarily homeless community, … this community is highly vulnerable to the COVID because most of them don’t have access to medical care or testing and are also already probably immune-suppressed and sick,” Demo told ENS by phone.

“So, on the one hand, our service is absolutely critical right now because it’s the [only] food that they’re going to get. But then, also, we have to be as wise as we can in how we’re doing it.”

The Diocese of West Missouri has not closed churches, but even if it did, Kansas City Community Kitchen would not be affected because it has its own location downtown. Kansas City’s mayor declared a state of emergency on March 12, banning all gatherings of more than 1,000 people, but the kitchen doesn’t cross that threshold.

Still, the kitchen is making changes to reduce the risk to its clients, including setting up hand sanitizing stations and shifting volunteer duties. It usually serves meals restaurant-style, but that may change to single-serving meals to go, to avoid having hundreds of people gathered in the building. Bringing food trucks in has been discussed as a possibility, Demo said.

“We’re trying to figure out creatively what we’re going to need to do,” Demo told ENS. “You don’t want to pull the service away from people that are depending on us for their sustenance and nutrition. And on the other hand, we’ve got to be aware of the fact that people will be at risk.”

New York Mayor Bill de Blasio declared a state of emergency in the city on March 12, that same day Holy Apostles Soup Kitchen in Manhattan’s Chelsea neighborhood, one of the largest soup kitchens in the country, announced it would modify its meal outreach and social services program in response to the coronavirus. Beginning March 16 and continuing at least through April 6, the soup kitchen will temporarily suspend its volunteer program and will distribute bagged meals instead of a daily cafeteria-style lunch, according to a press release.

“The soup kitchen is proud of its long-standing reputation as a cornerstone in the Chelsea community, and we do not take lightly the decision to modify our programming,” said the Rev. Anna S. Pearson, executive director of the Holy Apostles Soup Kitchen, in the release. “We are taking these precautions to protect all members of our community, while also recognizing many of our guests do not have the means to stock up on groceries. When your bank account is near zero or you don’t have your own place to call home, planning for a global pandemic is almost impossible, and the only food many of our guests eat is the meal they get here. We remain committed to our vital role in sustaining our neighbors who are struggling with hunger and poverty throughout this crisis.”

Further downtown, the Rev. Phillip A. Jackson, priest-in-charge and vicar of Trinity Church Wall Street, announced on March 13 that Trinity suspended all public services and activities – including its Brown Bag Lunch Ministry – at Trinity Church and St. Paul’s Chapel, five blocks to the north.

“While we are not aware of any confirmed cases of coronavirus among our community, we have made this decision out of an abundance of caution,” Jackson said in a letter to the congregation.