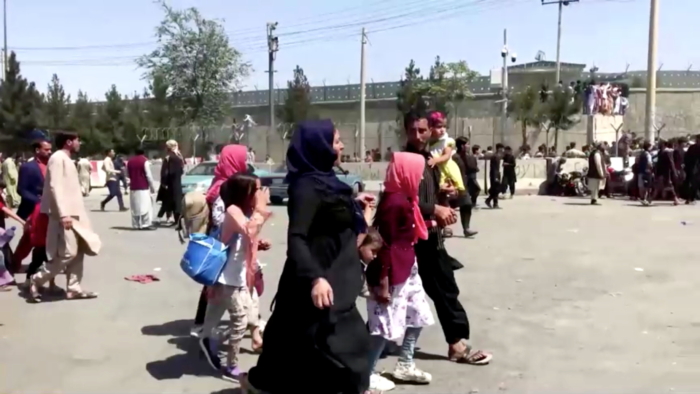 People gather outside the airport in Kabul, Afghanistan, on Aug. 16 in this still image taken from a video. Photo: Reuters

[Episcopal News Service] Episcopal Migration Ministries and its affiliates are mobilizing to respond to an expected increase of people fleeing from Afghanistan to the United States after the Afghan government fell to the Taliban on Aug. 15, expediting the end of the 20-year American war in the country.

Episcopal Migration Ministries, or EMM, is one of nine agencies with federal contracts to provide refugee resettlement services on behalf of the State Department. The agencies also have helped resettle people through the special immigrant visa program, which is intended to offer sanctuary for Afghans and their families who fear persecution because of their work in support of the U.S. government. 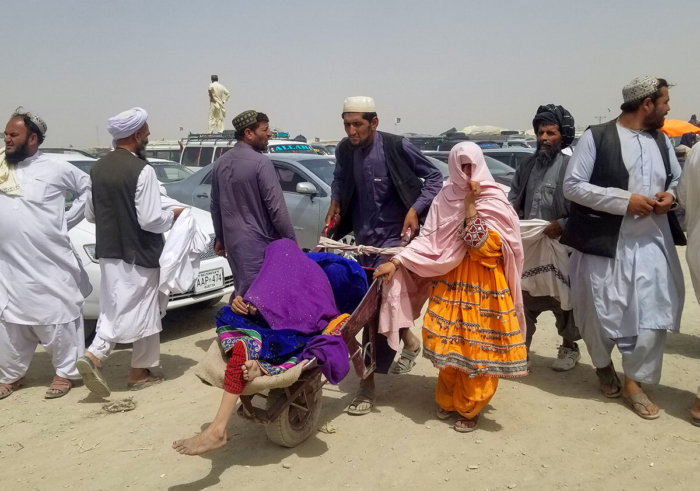 In recent days as the Taliban took over most of the country and the capital of Kabul, EMM officials say they have received inquiries from across the United States – from immigrant Afghan families wanting to help relatives back in their native country and from Episcopal congregations and Episcopalians asking how they can support those families. EMM is developing an online resource in Pashto, Dari and other languages spoken in Afghanistan to point families to available resources. Episcopalians interested in helping are encouraged to fill out a volunteer form or make a monetary donation.

“EMM is working in partnership with the government to assist our Afghan allies and provide resettlement services through our network of 12 affiliates,” Demetrio Alvero, EMM’s director of operations, told Episcopal News Service in a written statement. “We remain committed to providing welcoming services and necessary support to ensure Afghan arrivals receive the foundation they need to begin their lives in peace and safety in the U.S.”

Six of EMM’s 12 affiliates across the country already are working to resettle Afghan families, and so far this year, they have helped nearly 350 special immigrant visa recipients find new homes in the United States, officials said. EMM now is working with its affiliates to increase capacity to receive Afghan families amid deteriorating conditions under the Taliban.

“Thousands of Afghan nationals and their family members who gave everything to help the American military have now found themselves in grave danger,” said Russell Smith, chief executive officer of Refugee Services of Texas, an EMM affiliate based in Austin. Smith said Aug. 16 in a written statement that his organization has been told it will settle 324 Afghans in the coming weeks through its offices in Austin, Dallas, Fort Worth and Houston.

Refugee Services of Texas and other EMM affiliates have asked supporters to contribute in various ways, including by helping to find affordable housing for the incoming families. “We are asking our communities to help give back to these new arrivals who served us abroad,” the Diocese of Olympia’s Refugee Resettlement Office said in a Facebook post. It called for sponsor families and donations of household items.

Another EMM affiliate, Integrated Refugee & Immigrant Services in New Haven, Connecticut, issued a similar plea last week. “Help us find housing for Afghan families!” the organization said on Facebook. “We’re excited to welcome an influx of Afghans who’ve worked with the U.S. government – in some cases, with only a 24-hour notice.”

On July 8, President Joe Biden pledged to step up efforts to resettle Afghans connected to the American war effort – an issue that had gained urgency after his administration announced its plan to withdraw all troops from Afghanistan by Sept. 11. A first group of about 2,500 Afghans began arriving in the United States last month, initially to be housed at military bases during their completion of the special immigrant visa process.

The urgency was underscored Aug. 16 when large crowds stormed the airport in Kabul, desperate to gain access to one of the planes leaving the country under American guard.

Presiding Bishop Michael Curry responded Aug. 16 to the fast-moving crisis by issuing a prayer for the people of Afghanistan.

“There is a profound humanitarian crisis,” Curry said. “Countless people, mostly women and children, are now fleeing and vulnerable. The lives of many are now endangered. The hopes of many are forgone. Send your Spirit, Lord, to rally the resolve of the nations of the earth to find pathways to save human lives, protect human rights and to resolve the hardships of those seeking refuge, asylum and safety.”

EMM is best known for its refugee resettlement work. The Episcopal Church first began assisting refugees in the 1930s and 1940s through the Presiding Bishop’s Fund for World Relief, supporting people from Europe fleeing the Nazis. Since the Unites States created the current refugee resettlement program in 1980, EMM has resettled about 100,000 refugees, providing a range of services for these families upon their arrival in the United States, including English language and cultural orientation classes, employment services, school enrollment, and initial assistance with housing and transportation.

Refugee resettlement was reduced to the lowest level in the federal program’s 40-year history under President Donald Trump. The president sets the ceiling, or maximum number, for refugees to be resettled in the United States each year, and Trump slashed that number to a historic low of 15,000. Biden has said he will increase it to 125,000, and on May 3, his administration raised the cap to 62,500 for the rest of the current fiscal year, which ends on Sept. 30.

The refugee cap does not affect the number of people eligible for special immigrant visas, but EMM and the other eight agencies have just begun to rebuild resettlement programs that were decimated under the previous president. Those challenges also will extend to the efforts to welcome more Afghan families.

“In responding so quickly and comprehensively to the Afghan evacuee crisis, we in The Episcopal Church are doing what we’ve done for over eighty years — showing Jesus’ way of love in tangible ways by welcoming those who have left all behind, and offering them new hope,” the Rev. Charles Robertson, canon to the presiding bishop for ministry beyond The Episcopal Church, told ENS by email.