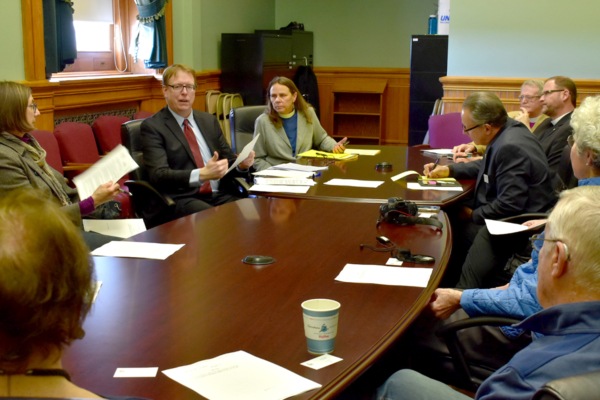 Iowa state Sen. Rob Hogg talks about pending legislation in a meeting with the Rev. Wendy Abrahamson, right of Hogg, and her group of “Episcopalians on the Hill” on March 3. Photo: David Paulsen/Episcopal News Service

[Episcopal News Service – Des Moines, Iowa] Should The Episcopal Church be involved in politics? Consider spending some time with the Rev. Wendy Abrahamson in the halls of Iowa government and she might convince you the answer is yes, when she’s not busy persuading state lawmakers to listen to the church.

In addition to her primary calling as rector of St. Paul’s Episcopal Church in Grinnell, Iowa, Abrahamson is a registered lobbyist – unpaid, nonpartisan and candidly Christian.

This is her fourth year advocating, on behalf of the Diocese of Iowa and Bishop Alan Scarfe, for and against legislation that intersects with policies approved by The Episcopal Church’s General Convention and the Iowa Diocesan Convention. “Lobbyist” may strike some as an unusual label for a priest, but that is the state’s term for the 653 people registered to do what Abrahamson does. She embraces the label. 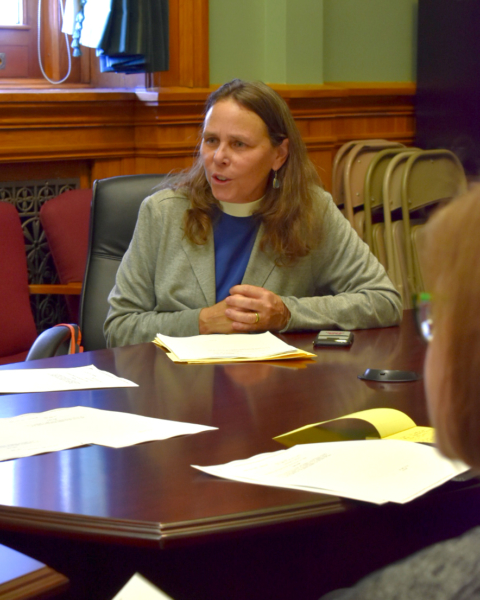 “In the United States, the distribution of good things is often regulated by legislation,” Abrahamson said. While congregations do good work alleviating the symptoms of inequality through ministries like soup kitchens and clothing drives, she said, “I think legislation is one way to get at the source of some of the problems. That’s why I think it matters that the church is there.”

The church was there at the state Capitol on March 3, when Abrahamson brought together more than a dozen Episcopalians for an afternoon event dubbed “Episcopalians on the Hill,” the diocese’s third annual lobbying day. Participants, some wearing clergy collars, came to meet with lawmakers and to learn how constituents like them can amplify their voices in representative government.

Being a registered lobbyist primarily allows Abrahamson to update the state’s lobbyist database with the Diocese of Iowa’s official positions on certain bills, but Episcopalians in the state don’t need to be lobbyists to talk to their elected officials. They just need to show up and ask.

Some brought deep experience in the legislative process. The Rev. Jeanie Smith, a deacon at St. Timothy’s Episcopal Church in West Des Moines, once worked in Washington, D.C., as a congressional lobbyist on behalf of an airport trade association. And the Rev. Marc Haack, a deacon at Trinity Episcopal Church in Iowa City, recently joined Abrahamson on Iowa’s list of registered lobbyists, drawing on his experience 18 years ago, when he lobbied for Iowa school administrators.

No experience is necessary, however. Abigail Livingood, a parishioner at St. Timothy’s, said she had visited the Capitol before but never for something like this. Even so, she had nominally more experience than The Rev. Stephen Benitz, priest-in-charge at St. John’s Episcopal Church in Mason City.

“I’ve never been in the building,” Benitz said.

Even Abrahamson admitted she’s “still learning the ropes,” and there are so many bills to follow. Through her deliberations with Scarfe, they have narrowed their focus to a handful of core areas that reflect the diocese’s priorities: gun safety, immigration, the environment, economic equality, LGBTQ rights and mental health care. Abrahamson sometimes reaches out to The Episcopal Church’s Office of Government Relations in Washington for further clarification of the church’s policy positions.

“She doesn’t lobby her own opinion,” Scarfe, who had joined the group at the Capitol, told Episcopal News Service during a break. “She lobbies issues that we know there is some track record” of Episcopal engagement on.

Like Abrahamson, Scarfe readily justifies the church’s political advocacy, which he says is a calling made plain in Episcopalians’ Baptismal Covenant – to “seek and serve Christ in all persons, loving your neighbor as yourself” and to “strive for justice and peace among all people, and respect the dignity of every human being.”

“You cannot be a person of justice and of truth and uphold the dignity of every human being without engaging yourself at some point in the political life of the human race,” Scarfe said. “That’s where the struggle, the collective struggle, happens.”

He also underscored that Christian advocacy is not partisan, and Episcopalians from both major parties have represented Iowans at the Capitol. He credited Maggie Tinsman, a Republican who served as a state senator until 2007, with encouraging the diocese to become more active in the legislative process. Tinsman, a past deputy to The Episcopal Church’s General Convention, was particularly supportive of legislation curbing human trafficking. 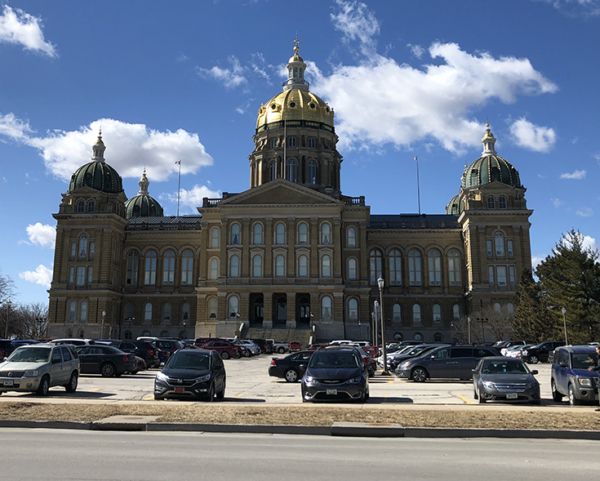 Today, Iowa has a Republican governor, and Republicans control both houses of the part-time Iowa Legislature, whose session starts in January and lasts about three months. The number of Episcopalians in office remains small, and all are Democrats, as far as Scarfe and Abrahamson are aware. Three of those Democrats made time for the Episcopalians on the Hill as they gathered for introductions and an orientation in a meeting room on the Capitol’s third floor.

Hogg joked of being “old and jaded” after nearly two decades in the Legislature. What he appreciates most from constituents is their sincerity in making personal appeals.

“I like people to just kind of come and tell me, ‘Why do you care about the issue?’” he said. Begin to develop relationships with your lawmakers, he said, even those who aren’t likely to vote your way. “You might be disappointed, but you might not be. You might be able to make a difference.”

Rep. Ross Wilburn echoed Hogg’s advice. “I personally like to hear stories, if folks are willing to share, and know how [legislation] touches you,” he said.

Wilburn is one of Iowa’s newest legislators, having won a special election last year. A former Iowa City mayor, he now lives in Ames, where he attends St. John’s by the Campus Episcopal Church, near Iowa State University.

They were joined later by Rep. Bob Kressig, who has represented Cedar Falls since 2005. He attends St. Luke’s Episcopal Church.

“You know what I love about that church? They love everybody that comes there,” he said.

The lawmakers detailed some of the bills that were expected to come before the House and Senate that day, and they gave their visitors additional suggestions for making a difference: Connect with other organizations doing similar work. Even if a bill fails to make it out of a committee, the measure could pop up in a different form later in the session, so don’t give up on it. Find ways to reach lawmakers who appear to be on the fence about pending legislation, because it may not be as effective to try persuading those who have taken firmer positions.

Abrahamson added it is important to thank lawmakers, regardless of their parties or policy positions, for the work they do on the people’s behalf.

“One of the things that I care about is that you all know that we pray for you,” Abrahamson said. “I hope that this ministry will express our collective thanks.” 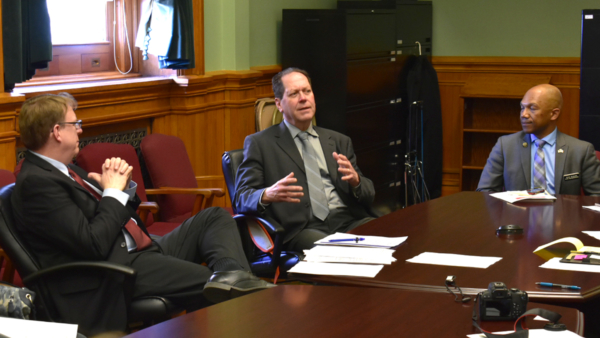 After about an hour, the three lawmakers prepared to return to their legislative work, and Scarfe sent them off by saying two prayers, one for the lawmakers and another for those they serve.

Abrahamson and her group remained in the room for about another half-hour to discuss their strategy. With a long list of bills worth discussing, Abrahamson highlighted three for the Episcopalians to emphasize. The diocese was advocating defeat of two bills: one that would prevent local governments from regulating shooting ranges and another that would increase administrative hurdles for recipients of public assistance. The third bill, supported by the diocese, would create a voluntary certification system for hotels that have trained employees in preventing human trafficking.

Livingood said her daughter works for an organization called Truckers Against Trafficking, and Abrahamson encouraged her to mention that personal connection when talking with lawmakers.

After the orientation meeting, the group walked down the hall to doors that opened into the gallery overlooking the Senate floor. Abrahamson invited the Episcopalians to sit briefly and witness the legislative process in action, including a vote to allow Iowans with gun permits to take their guns onto school grounds.

Abrahamson told ENS she rarely preaches on political topics at St. Paul’s in Grinnell, home of Grinnell College – a “liberal bubble in a liberal college town,” she said – but once or twice a week she visits the Capitol to catch up on legislation and meet with lawmakers.

Lawmakers don’t have offices at the Capitol, so they meet with constituents in the rotunda, out in the open. “They have a lot of access here in Iowa,” Abrahamson said. To speak with a senator or representative, a citizen need only fill out a yellow slip the size of an index card, submit it for delivery to the lawmaker and wait to see if the lawmaker has time. 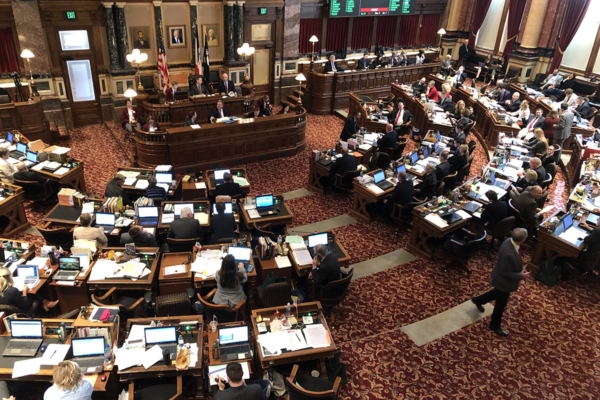 The Iowa Senate is seen from the gallery above. Photo: David Paulsen/Episcopal News Service

The Episcopalians at the Capitol had hoped to spend the rest of the afternoon filling out those yellow slips and meeting with lawmakers, but they were dealt a double dose of disappointment: The House had recessed, so its members weren’t available to meet with constituents, and the senators voted to break for meetings with their party caucuses while the Episcopal group was sitting in the gallery.

Even so, the “ministry of presence” matters too, Abrahamson said, and this would not be the only opportunity for her and the other Episcopalians to make contact with lawmakers.

Abrahamson, Scarfe and the others gathered afterward at a nearby restaurant called Tasty Tacos – its slogan: “Nada Es Imposible.” Over chips, tacos and burritos, they made plans to follow up with lawmakers by email or, in some cases, in person. 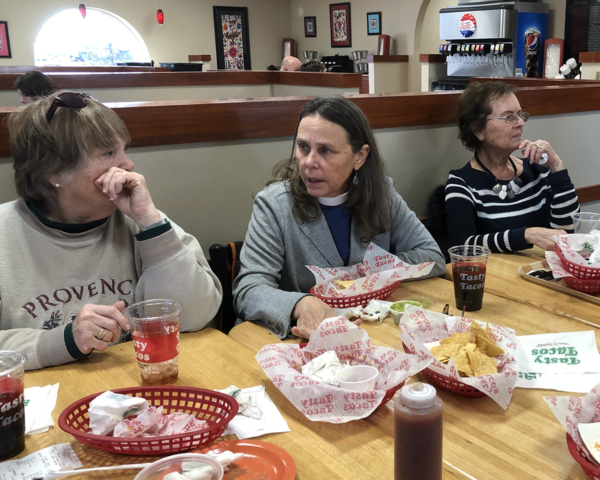 The Rev. Wendy Abrahamson, center, talks about the day’s activities with the Rev. Jeanie Smith, left, at Tasty Tacos, a restaurant near the Iowa Capitol in Des Moines. Photo: David Paulsen/Episcopal News Service

Abrahamson asked for feedback on the lobbying day, and the response was decidedly positive despite not being able to meet with more lawmakers this time. Several of the Episcopalians said they appreciated receiving insight into the process from the three lawmakers who spoke to the group early in the afternoon. One suggested possibly partnering with other Christian denominations for a joint lobbying day.

Another suggestion was to expand her communications, possibly to include an email list. To this point, Abrahamson’s primary communication platform has been a Facebook group that is approaching 400 members.

Abrahamson said she hopes to build on the diocese’s ongoing engagement with legislators, especially now that Haack, the Iowa City deacon, has signed on as the diocese’s second registered lobbyist.

Benitz said he plans to share what he’s learned with his congregation back in Mason City, letting his parishioners know ways they can get involved, and he came away from this experience particularly inspired to engage with lawmakers who disagree with him on certain issues. He thanked Abrahamson for inviting him and the others to the Capitol with her.

“It’s wonderful just to have an opportunity to go there and experience it, and to be there with a guide,” Benitz said.