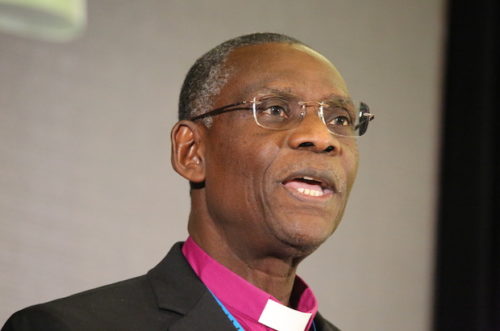 His formal notice of retirement was given to the Anglican Communion’s Standing Committee during a meeting last week.

The chair of the Anglican Consultative Council, former archbishop of Hong Kong, the Most Rev. Paul Kwong, said: “I would like to express my gratitude to Archbishop Josiah Idowu-Fearon for being an outstanding secretary-general of the Anglican Communion. His fruitful ministry is marked by his commitment to making himself available always to connect or reconnect people and trying to bring them together in the communion.

“I thank him deeply for what he has done for the communion, in particular, the Anglican Consultative Council. I wish him all the best for the next phase of his ministry,” Kwong said.

Archbishop of Canterbury Justin Welby, said “I am deeply grateful to Archbishop Josiah Idowu-Fearon for his leadership in the Anglican Communion as secretary-general of the Anglican Consultative Council. I first met Josiah in 2002 in a railway station café – an appropriate place to meet a bishop who is constantly on the move and always seeking new places to share and live out the Gospel. In the following years I traveled often to his province in Nigeria, a country very dear to my heart that has long enriched my faith

“When he began his tenure as secretary-general, Archbishop Josiah said his prayer was to be a bridge-builder – and over the last six years we have seen God answer that prayer. Josiah’s work in this role has taken him around the communion. He has ministered to us through a profound respect both for our difference and diversity, and with a vision for our unity in Jesus Christ. For his remarkable determination and courage in pursuing this calling, I praise God for the gift that Josiah has been to us.

“I am especially grateful to Josiah for his wisdom and work in the preparations for the Lambeth Conference, and I am glad he will still be in post when that takes place next year. I look forward to continuing in partnership in the Gospel with Josiah over his remaining time as secretary-general and in the future beyond that.”

Idowu-Fearon said: “When I was appointed to this post, I said that ‘my prayer to God is very simple, that I would be able to be a bridge-builder; to create the culture of respect for differences, a culture of accepting people as human beings and loving them for who they are in Christ. If within the Communion, we have this understanding, we can live together with our differences.’

“Over the past six years we have seen this prayer come true. There are still divisions within the Anglican Communion; but there is very little of the bitterness and rancor that existed previously.

“In the early part of this century, the Instruments of Communion met to discuss our difference. Committees and groups were established to examine divisive issues. But agreement was hard to come by. Now, the instruments meet to discuss what we agree on: the Gospel of Jesus Christ and how we play our part in the mission and ministry of His global Church.

Prior to his appointment as secretary-general of the Anglican Communion, Idowu-Fearon served the Church of Nigeria (Anglican Communion) as bishop of Kaduna and archbishop of the Province of Kaduna. Before that he was bishop of Sokoto; warden of St. Francis of Assisi Theological College in Wusasa and provost of St Michael’s Cathedral in Kaduna.

He continues to play a role in the region, serving as chair of the Kaduna State Peace Commission which is trying to bring about an end conflict between rival groups in that region of the country.

Before ordination, he attended Nigeria’s military school before leaving the Army to train for the priesthood. After his studies in Nigeria, he went to the United Kingdom. There he attended St. John’s College, Durham University, where he studied theology. He then went to Birmingham University earning master’s in Islamic studies and Muslim-Christian relations. It was then, he says, that he realized “the Lord was calling me to be a bridge-builder”.

Subsequently, he earned a Ph.D. in sociology and a postgraduate diploma in education from Ahmadu Bello University in Nigeria. He has written and lectured extensively about Christian-Muslim relations and served on a number of interfaith bodies.

Idowu-Fearon has been awarded the Officer of the Order of the Niger, the Archbishop of Canterbury’s Cross of Saint Augustine’s Award, and is a Canterbury Six Preacher.

The Anglican Communion Standing Committee is working on a succession plan to recruit the next secretary-general.  More details will be announced at a later date.