[Episcopal News Service] “King Lear,” William Shakespeare’s bleak saga of betrayal and madness, has been produced in almost every setting and circumstance imaginable over the centuries. But a small church in Pennsylvania put a new spin on the classic tragedy on April 23 – Shakespeare’s birthday – when its amateur drama troupe teamed up with nationally known actors to perform the play live via Zoom, with actors reading their parts from their homes, as a fundraiser for a local food bank.

St. Andrew’s Episcopal Church in Yardley, Pennsylvania, had never livestreamed anything before the COVID-19 lockdown, according to its rector, the Rev. Hilary Greer. Within the span of a few weeks, they were livestreaming services, prayer groups, concerts, yoga classes and more. The longer the lockdown dragged on, the more ambitious their programming ideas got, thanks to personal connections, technology and a little luck. 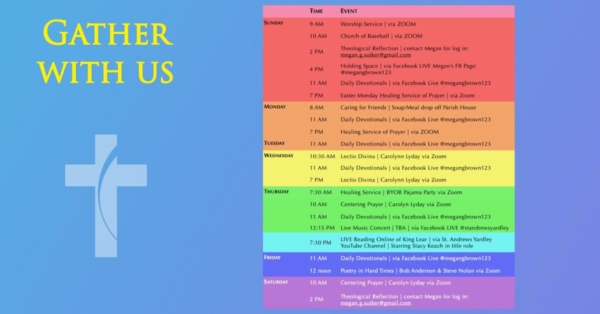 The schedule of livestream events from St. Andrew’s Episcopal Church in Yardley, Pennsylvania, for the week of April 19.

For example, Greer reached out to a friend from college – a professional harpist based in Dallas, Texas – and asked if she’d perform a livestream concert for the church. It ended up being the world premiere of three new pieces whose composers allowed her to play them after scheduled concerts were canceled.

It’s given parishioners a chance to connect through shared experiences even when they’re apart, Greer said.

“People have just been really grateful that they’ve been able to connect online,” she told Episcopal News Service. “They actually feel very deeply connected to each other in the church because of that.”

The idea to do Shakespeare came from a conversation between Greer and parishioner Gary Sloan, a seasoned actor and drama professor who directed the production and played Edgar – the same role he played in a production 30 years ago to the day.

The idea snowballed from a Shakespeare appreciation workshop into a live reading with actors from the St. Andrew’s Players. Sloan mentioned that Shakespeare wrote “King Lear” during an outbreak of the plague, when theaters were closed, and it seemed like a natural choice.

“That’s a 400-year-old connection between us,” Sloan told ENS. “And that’s when I thought, ‘But that’s a hard play!’ You don’t just read ‘Lear,’ you know? And that’s when we started fantasizing about a more professional cast, along with parishioners and the St. Andrew’s Players.”

“It’s not just ‘Let’s stage a Shakespeare show online’ but ‘Let’s really look at how we can connect across time with people who have had similar experiences to what we have now,’” Greer said. “We’re really experimenting with what it means to be live together and what it means to do theater in a time of pandemic.”

Sloan reached out to connections from his theatrical circles and managed to convince Golden Globe winner Stacy Keach — a constant presence in film and TV for decades and one of America’s preeminent Shakespearean actors — to reprise his role as Lear, which has won him awards in multiple productions. Sloan also enlisted Edward Gero, who played Gloucester opposite Keach’s Lear in two past productions, to reprise his role, and Keach’s daughter Karolina joined him as Lear’s daughter Regan.

A few other professional actors joined the amateurs from St. Andrew’s for a cast of 16, and they rehearsed for a couple of weeks before the live show, which was broadcast on YouTube on the 23rd.

“This was just such a huge leap of faith,” Greer said, especially for professional actors with high-caliber reputations to take part in a live production for a small church over a medium they’d never used before.

“What does it look like and how does it come across when everybody’s just in these boxes, and you have to enter the scene yourself and exit the scene yourself and light yourself and do your own background and all of that?” Greer had wondered. “It’s just a huge undertaking and a big risk and they really all kind of dove into it with such a good spirit. It’s really lovely.”

The technological challenges were the hardest part, Sloan said. Veteran actors like Keach are used to acting through the various mishaps that can happen on stage, but when that stage is Zoom, there’s a whole new range of things that can go wrong – like losing your Wi-Fi connection.

“That’s nerve-wracking! Syncing the sound with a face is nerve-wracking because you don’t know if your kid’s upstairs gaming or if your wife’s on her computer or, oh my gosh, what’s going to happen if the whole neighborhood is online right at the same time?”

But the actors got the hang of it, and it ended up being a totally unique experience for the professionals and amateurs alike, Sloan said.

Three decades and a pandemic after his previous performance in “King Lear,” Sloan found new meaning in a tragedy so universal that it seems to transcend time.

With the “Lear” production and other livestream programming, Greer said she is “seeing the things that the church is capable of doing now that we were not capable of doing before. If we had done ‘King Lear’ or whatever Shakespeare [play] we were going to do in person, we would never have had a Stacy Keach.” The church’s feeding program has also risen to the occasion, from making meals once a month in the parish hall to collecting homemade meals and dropping them off once a week.

“There are powerful ways of being the church that don’t rely on our buildings,” Greer said.